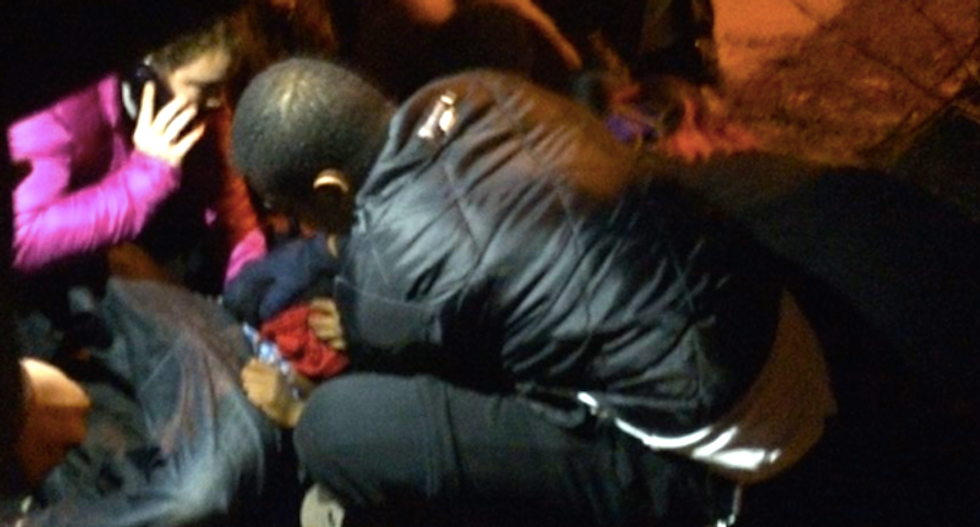 A group of suspected white supremacists fired into a crowd of Black Lives Matter activists protesting the Minneapolis police killing of Jamar Clark.

At least five people were wounded when the gunmen opened fire about 10:45 p.m. Monday at the city's Fourth Precinct, reported the Star Tribune.

Police said all five victims were treated for non-life-threatening gunshot wounds, although authorities said additional victims may have been wounded and sought treatment on their own.

Investigators have not released much information so far about the possible suspects, saying only they were seeking three white men, but protesters said they had a pretty clear idea of who fired the gunshots.

“A group of white supremacists showed up at the protest, as they have done most nights," said Miski Noor, a Black Lives Matter activist.

Another demonstrator said one of the three men wore a mask and stayed at the protest site since early morning Monday, taunting the protesters.

The men, who police said were wearing bulletproof vests, opened fire on six activists who angrily attempted to herd them away from the protest site, witnesses said.

A witness said she initially believed the gunshots were firecrackers and thought, “surely they’re not shooting human beings," but then she saw two black men had been wounded -- one shot in the back and leg and the other man in the arm.

Another protester was shot in the stomach and later underwent surgery.

The masked and armed gunmen then fled the scene -- and witnesses said police fired chemical irritant into the crowd, although city officials dispute those claims.

The shootings came just three days after a Black Lives Matter protester was beaten and kicked by Donald Trump supporters at an Alabama campaign rally, and the Republican candidate said afterward the demonstrator was "disgusting" and arguably "should have been roughed up."

Black Lives Matter activists have been protesting the Nov. 15 fatal police shooting of the 24-year-old Clark, who witnesses say was handcuffed when he was killed.

Clark's brother called for an end to the demonstrations hours after the shootings. “Thank you to the community for the incredible support you have shown for our family in this difficult time," said Eddie Sutton, Clark's brother. "We appreciate Black Lives Matter for holding it down and keeping the protests peaceful. But in light of tonight’s shootings, the family feels out of imminent concern for the safety of the occupiers, we must get the occupation of the 4th precinct ended and onto the next step.”

Demonstrators have complained throughout the protest that Minneapolis police officers have pointed their weapons at them without justification.