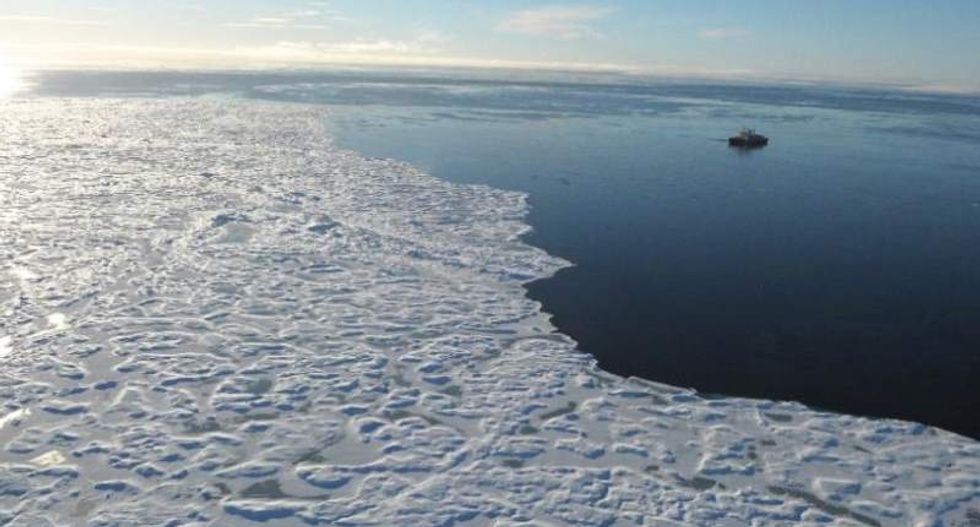 The Arctic is heating up, with air temperatures the hottest in 115 years, and the melting ice destroying walrus' habitat and forcing some fish northward, a global scientific report said Tuesday.

Air temperature anomalies over land were 2.3 degrees Fahrenheit (1.3 degrees Celsius) above average, "the highest since records began in 1900," said the 2015 Arctic Report Card, an annual peer-reviewed study issued by the National Oceanic and Atmospheric Administration.

Meanwhile, the annual sea ice maximum occurred February 25, about two weeks earlier than average, and was "the lowest extent recorded since records began in 1979."

"Warming is happening more than twice as fast in the Arctic than anywhere else in the world. We know this is due to climate change, and its impacts are creating major challenges for Arctic communities," said NOAA chief scientist Rick Spinrad at the annual American Geophysical Union fall meeting in San Francisco.

The report includes 70 authors from 10 countries, and is guided by an editorial team from the Office of Naval Research, the US Army Corps of Engineers' Cold Regions Research and Engineering Laboratory, and NOAA.

The average annual air temperature was measured over land between October 2014 and September 2015.

It marked a 5.4 degree F (3 degree C) increase since the beginning of the 20th century.

The minimum sea ice extent, measured on September 11, 2015, was the fourth lowest in the satellite record since 1979.

"Arctic minimum sea ice extent has been declining at a rate of 13.4 percent per decade" relative to the 1981-2010 average, said the findings.

In the 1980s, older, thicker ice made up about half of the ice sheet, but now, what is known as "first year ice" dominates the winter ice cover and made up 70 percent of the March 2015 ice pack.

This thinner, younger ice is more likely to melt in the summer than thicker ice, said the report.

Snow cover across the Arctic has also been declining and is down 18 percent per decade since 1979.

This year, Greenland experienced its first significant melting event since 2012, and lost more than half of its surface area.

However, the "advance of nine relatively wide glaciers resulted in a low annual net loss of 6.4 square miles (16.5 square kilometers)," said the report.

The melting trends have also allowed more sunlight to reach the upper layers of the ocean, promoting photosynthesis and stimulating the growth of algae.

"Widespread and exceptional phytoplankton blooms were observed in 2015 in Arctic seas along the edge of the continental shelf, including waters to the southwest and east of Greenland, in the Bering Sea between Alaska and Russia, and in the Barents, Kara and Laptev seas north of Russia," said the report.

A series of guest essays that accompanied the report showed how walrus and fish behavior is disrupted by the warming.

"The decline in sea ice is dramatically changing the habitat for walruses -- large marine mammals that traditionally use sea ice for mating, giving birth to young, finding food and shelter from storms and predators," said the report.

"In recent years, large numbers of walrus have been forced to haul out on land in northwest Alaska. This behavior, documented through aerial surveys, has created problems such as overcrowding which has led to stampedes that have killed calves and difficulty finding food."

Fish are also on the move due to the changing climate.

The report found "a northward movement of subarctic fish species such as cod, beaked redfish and long rough dab, into Arctic waters."

Police revealed that the shooter is in custody and was able to arrest him within five minutes of arriving on scene. There were over one hundred 911 calls, the police chief said in a briefing.