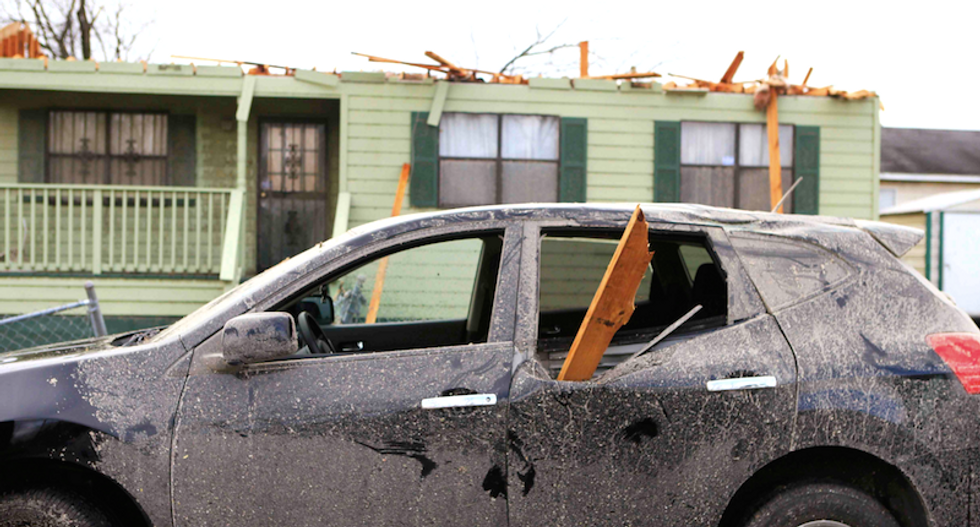 Damage caused by a tornado is seen in a neighborhood in Birmingham, Alabama, December 26, 2015. (REUTERS/Marvin Gentry)

Storms hit the U.S. South, Southwest and Midwest over the Christmas holiday weekend, unleashing floods and tornadoes that killed at least 43 people, flattened buildings and snarled transportation for millions during a busy travel time.

The bad weather, or the threat of it, prompted the governors of Missouri and New Mexico to declare a state of emergency for their states.

Flash floods killed at least 13 people in Missouri and Illinois.

In Missouri, emergency workers have evacuated residents from their homes and conducted dozens of water rescues, Governor Jay Nixon said on Sunday. He said at least eight people had been killed and numerous roadways had been closed.

Three adults and two children were near the village of Patoka, Illinois, 85 miles east of St. Louis, Missouri, when their car was washed away by floodwaters on Saturday night, according to Marion County Coroner Troy Cannon.

In Texas, at least 11 people were killed in the Dallas area over the weekend by tornadoes, including one packing winds of up to 200 miles per hour. The twister hit the city of Garland, killing eight people and blowing vehicles off highways.

"It is total devastation," Garland Police spokesman Lieutenant Pedro Barineau said. "It is a very difficult time to be struck by such a horrible storm the day after Christmas."

Three other deaths were reported in the Dallas metropolitan area, the United States' fourth most populous with about 7 million residents. Scores of people were injured in the region and officials estimated some 800 homes may have been damaged.

Powerful tornadoes are a staple of spring and summer in central states but occur less frequently in winter, according to U.S. weather data

Three tornadoes were reported in Arkansas on Sunday, the weather service said, but there were no initial reports of significant injuries or damage.

The service has issued tornado watches and warnings for areas in that state, as well as in parts of Texas, Louisiana, Oklahoma and Mississippi.

The storms came on the heels of tornadoes that hit two days before Christmas, killing at least 18 people, including 10 in Mississippi.

In Texas, Governor Greg Abbott said his office had declared Dallas County and three nearby counties disaster areas. He also warned people to be wary of snow in western parts of the state and rivers spilling their banks in other places.

The National Weather Service issued severe weather advisories for large parts of the central United States, including a blizzard warning for parts of New Mexico, Texas, Oklahoma and a flash flood watch stretching from Texas to Indiana.

New Mexico Governor Susana Martinez declared a state of emergency for the entire state due to a winter storm that had dumped up to two feet of snow by Sunday night.

The bad weather forced the cancellation of nearly 1,500 flights in the nation on Sunday, according to tracking service FlightAware.com. About half of the canceled flights were in Dallas, a major U.S. flight hub.