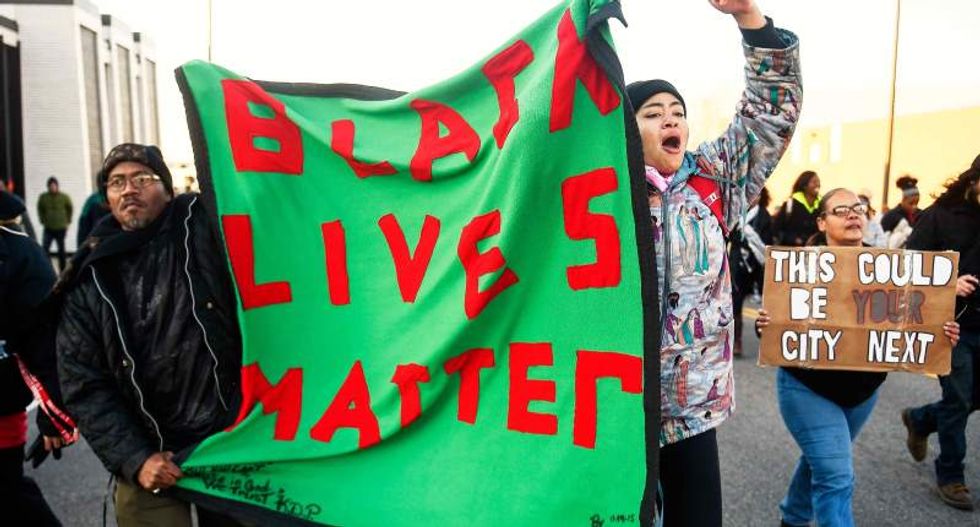 Members of the group Black Lives Matter march to city hall during a protest in Minneapolis, Minnesota on Nov. 24, 2015. (Craig Lassig/Reuters)

A demonstration at the Mall of America on Wednesday by protesters angered by the police killing of an unarmed black man in Minneapolis last month was swiftly broken up by police and mall security on one of the busiest shopping days of the year.

About 100 people started to gather in the east atrium of the mall, one of the largest in North America, around 1:30 p.m. (1830 GMT), despite a judge's warning that the property's owners could legally block the protest, organized by the Black Lives Matter movement.

Police and mall security quickly moved in, warning any who did not leave they would be arrested for violating mall policy against demonstrations and alerting shoppers that that area of the mall was on lockdown. Police took one man into custody and forced people in the protest area outside into a light snow.

People also lined the tiers on the three floors above the protest, although it was not clear whether they were involved or watching. Some stores locked their doors ahead of the demonstration.

Black Lives Matter demonstrators camped outside a Minneapolis police station for nearly three weeks after a police officer shot Jamar Clark, 24, on Nov. 15. The death of Clark, who was unarmed, has added fuel to an already heated debate over race and justice in the United States following several such killings across the nation in the past year.

Wednesday's short protest marked the second consecutive year that the loosely organized movement, which grew out of protests over police killings in Ferguson, Missouri, New York and other cities, had demonstrated near the peak of the holiday season.

Black Lives Matter officials had promised to assemble at the mall "restraining order or not" and said in a Facebook post late Tuesday, "What happens next will tell us volumes about who we are as a society." After the protest was broken up, the group Tweeted that it was gathering at a nearby train station.

Just before last Christmas, more than 1,500 Black Lives Matter protesters demonstrating against grand jury decisions not to charge police officers in the killings of unarmed black men in Ferguson, Missouri and New York shut down part of the same mall.

The protest, days after rioting and arson in Ferguson, resulted in the arrests of about two dozen people, mostly for trespassing and failure to disperse.

The night before this year's Macy's Thanksgiving Day parade in New York, members of the group marched through Macy's Herald Square flagship store to show solidarity with the Minneapolis chapter.

Officials with the Mall of America, located in a suburb of Minneapolis, had said they could ban demonstrations on private property as allowed under the law. This week they asked a judge to bar the group, its leaders and others from protesting and require it to delete social media posts advertising the demonstration.

However, Hennepin County Judge Karen Janisch denied a broad temporary restraining order, only barring three leaders of the group from the protest. She warned that the order, which did not extend to the group itself or unnamed people, should not be seen as authorization to protest without the mall's permission.

In Monday's hearing, mall attorney Susan Gaertner said she sought the court order because of the group's choice of forum, not the content of its message.

Attorney Jordan Kushner, who represented the group's leaders Miski Noor, Kandace Montgomery and Michael McDowell, said the mall could remove demonstrators but could not tell them what they may say.