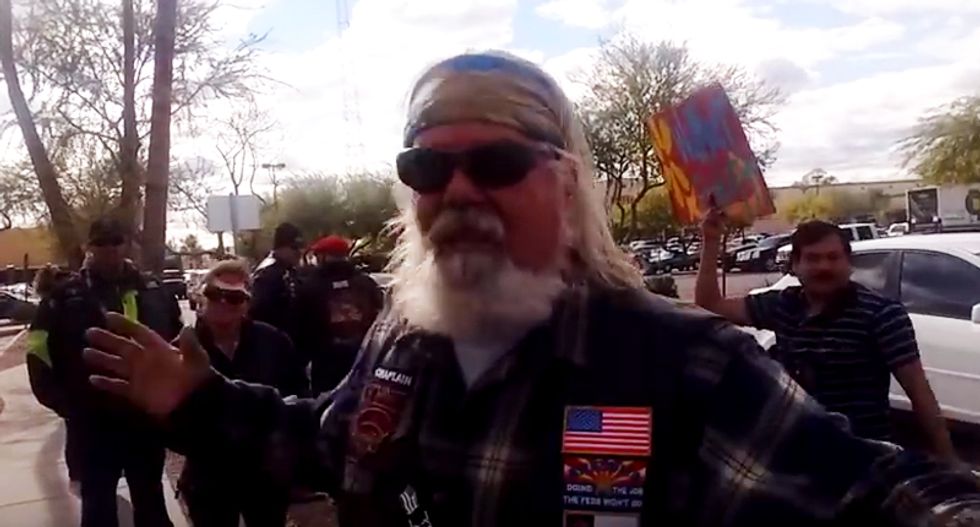 A confrontation between two groups of protesters -- with wildly divergent points of view -- broke out in a Phoenix Walmart parking lot Saturday morning as off-duty police employed by the store stood by, reports the Phoenix New Times.

According to police, one man was hauled away after pummeling independent videographer Dennis Gilman, who claims he was filming a demonstration by Hispanic activists opposing Walmart policies toward day laborers.

Management at the store recently announced that they would prosecute day laborers for trespassing in the lot located near a Home Depot, before backing off when protesters showed up. The protests have led to counter-protests by heavily-armed nativists who show up each day with American flags, telling the protesters to go home to Mexico.

Although the off-duty cops were keeping a watchful eye on the groups, a fight broke out on Saturday as they watched.

According to Gilman, a man pushed his camera, and then attacked him as he attempted to fight back.

"He probably hit me after that," said Gilman, whose face was scratched up. "Then the cops finally took him away."

Witnesses state that  the man who fought Gilman was part of a group of about 25 nativist counter-protesters who maintain a camp on the sidewalk near the entrance to the shopping center.

Gilman's attorney Ray Ybarra, said that his client didn't want to press charges -- calling it "mutual combat" -- before adding that the parking lot security officers were helpless to stop the fight.

"The cops were literally surrounding these people when it happened," Ybarra explained. "And they were so out of control of the situation that even their presence, within feet, maybe even inches, didn't prevent the incident."

The protests at Walmart have been going on once a week  for about a month now, led by Salvador Reza, of the Barrio Defense Committees, who are urging people to boycott the Walmart location over the trespass threat.

Each day that they show up to protest they are met by the counter-protesters with flags, signs and guns.

Watch video below of a confrontation earlier last week, posted by Salvador Reza on YouTube: