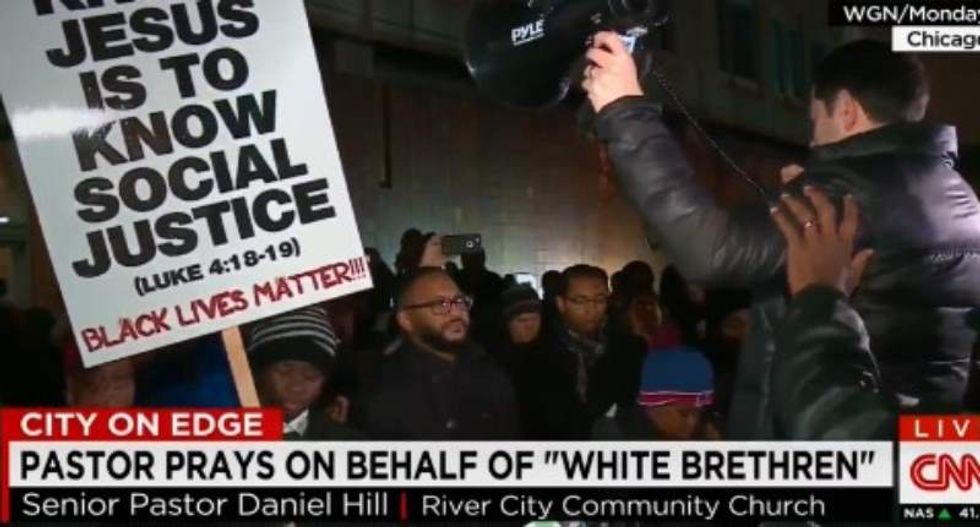 Pastor Daniel Hill leads a prayer of repentance for his 'white brothers and sisters' in Chicago on Nov. 30, 2015. [YouTube]

A white Chicago pastor offered a public confession on Monday for his "white bretheren and sisters" in the wake of the fatal shooting of Laquan McDonald at the hands of local police.

Footage aired by CNN on Tuesday shows Daniel Hill speaking through a megaphone at a rally as he described "the history of holding our people, our color, our kind as the epitome of most valuable, and of devaluing so many other people. Of devaluing so many black lives. None of us want to say it out loud, but we show it in the ways that our systems play out every day in our country."

Hill also prayed for repentance for "violent acts done in the name of racism," identifying both McDonald and Rekia Boyd as victims of those types of acts.

"We repent of the apathy that has caused so many of us to sit on the sidelines and just watch in a bewildered state," he said.

On Tuesday, he told CNN host Brooke Baldwin that he was asked to pray for repentance by a group of local clergy who organized the event.

"Do you risk painting an entire race of people as racist?" Baldwin asked later in the interview. Hill responded by saying he was "much more concerned with systems and structures" than individuals' behaviors.

"I think this is where I get stuck in conversation with a lot of my white friends," he said. "They're so eager to show that they're on the right side of this, and that they avoid anything that could sound politically incorrect or sound racist, and I'm like, 'Great, I hope you do that. That's only a small part of what is the problem.'"

Watch Hill's prayer and his interview with Baldwin, as posted online on Tuesday, below.