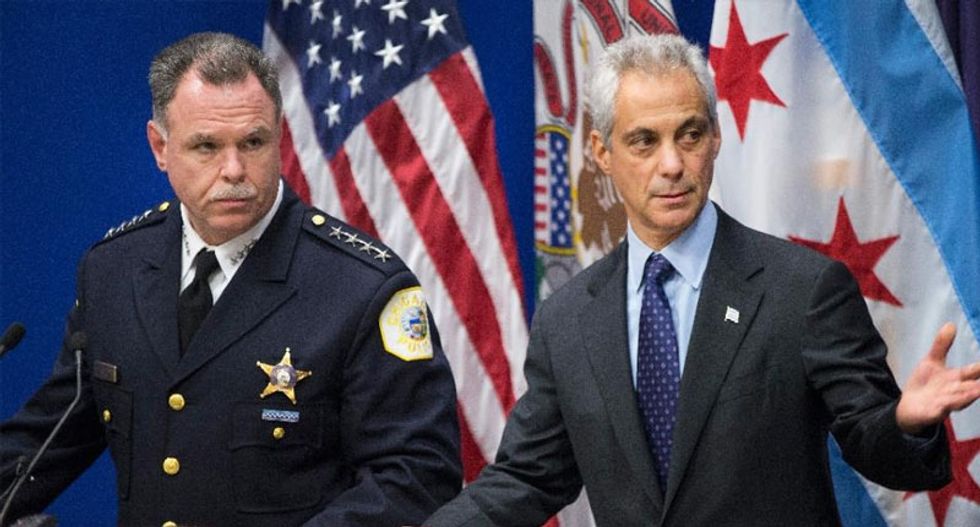 Chicago's police chief was ousted on Tuesday following days of unrest over video footage showing the shooting of a black teenager and the filing of murder charges against a white police officer in the young man's death.

Mayor Rahm Emanuel, who had stood by Superintendent Garry McCarthy, announced during a news conference he had asked McCarthy to resign. The mayor said he was creating a new police accountability task force.

The announcements came a week after the officer, Jason Van Dyke, was charged with first-degree murder in the killing of Laquan McDonald, who was shot 16 times. The video of the killing was released on the same day.

High-profile killings of black men at the hands of mainly white law enforcement officials in U.S. cities over the past two years have prompted demonstrations across the country, and have stoked a national debate on race relations and police tactics.

The mayor, a Democrat and the former chief of staff to U.S. President Barack Obama, said he was responsible for what happened in the case, the same as the police superintendent.

"I'm responsible. I don't shirk that responsibility," Emanuel said. He added that the creation of the task force was meant to rebuild trust in the police department of one of the country's largest cities.

Emanuel said McCarthy had become an issue and “a distraction.” In an editorial on Tuesday, the Chicago Sun-Times had called for McCarthy's resignation. The Chicago City Council black caucus had also called for him to leave.

“I have a lot of loyalty to what he’s done and him, but I have more loyalty to the city of Chicago and its future,” Emanuel said.

Emanuel, McCarthy and Cook County State's Attorney Anita Alvarez have faced criticism for taking 13 months to release the video of the 2014 shooting and to charge Van Dyke.

The video shows Van Dyke gunning down McDonald, 17, in the middle of a street on Oct. 20, 2014, as McDonald was walking away from police who had confronted him.

Van Dyke, 37, was released from jail on Monday after posting bond on a $1.5 million bail.

Protests followed the charging and arrest of Van Dyke and the release of the video on Nov. 24. In a protest on Monday, the president of the National Association for the Advancement of Colored People, Cornell William Brooks, was one of several protesters arrested, the organization said.

Emanuel said the new task force, which will be advised by former Massachusetts Governor and Chicago native Deval Patrick, will review the system of accountability, oversight and training in the police department.

The five-member panel will recommend reforms to improve independent oversight of police misconduct, ensure officers with repeated complaints are evaluated and establish a process for release of videos of police-involved incidents, Emanuel said. Its recommendations will be presented to the mayor and city council by March 31, 2016.

(Additional reporting by Brendan O'Brien in Milwaukee and Ben Klayman in Detroit; Editing by Jonathan Oatis and Howard Goller)