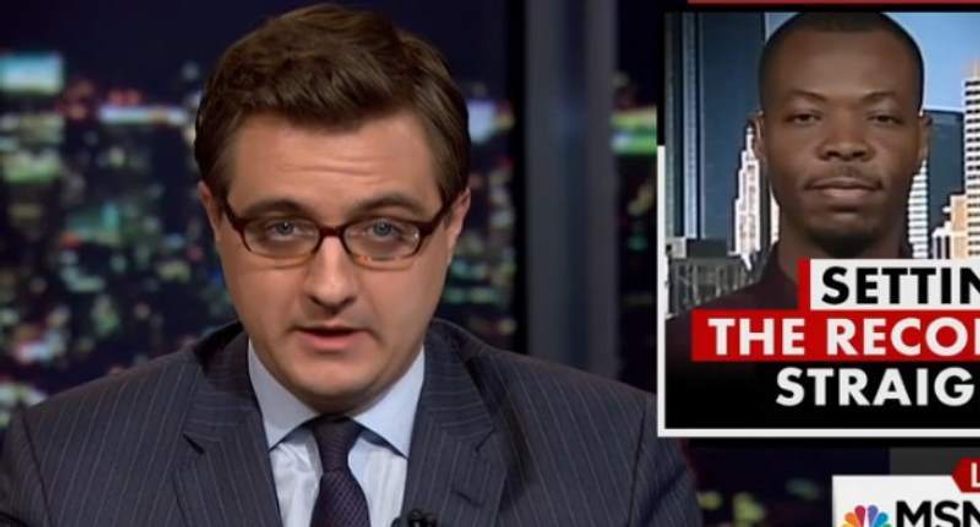 MSNBC host Chris Hayes denounced conservative media outlets on Thursday for spreading a story -- since debunked -- alleging that a Muslim Air Force veteran who is not allowed back into the country was arrested on suspicion of terrorism.

"I'm sure the countless editors and writers who passed it along don't think of themselves as bigots," Hayes said of the inaccurate reporting surrounding Saadiq Long. "But they unambiguously aided the worst kind of bigotry. And every last one of them should be ashamed."

The story, which was first posted by Pajamas Media, stated that Long was arrested in Turkey and linked to the Islamic State extremist group. It was subsequently carried by outlets like RedState and The Daily Caller, among others. Some reports showed a picture of Long being interviewed by Hayes in 2013, in a segment explaining how he had been placed on the federal no-fly list with no explanation.

Long, who has been living in Qatar, was detained after entering Turkey with his family. However, as The Intercept reported, Long was actually detained because they are all on the no-fly list, and not any terrorism-related charges. He is currently being held for deportation.

"Saadiq Long, who served his country for more than ten years in the armed services, was first tagged with suspicion by a secretive no-fly list due clearly at least in part to his faith," Hayes said. "And it was that suspicion plus his faith that made him a plausible target to be smeared as a man who just up and joined the death cult ISIS. And now his name appears next to ISIS in literally hundreds of articles and tweets. His face is under an ISIS headline on Mediaite and those other sites basically forever unless those outlets show a little bit of contrition and change it. The Daily Caller today acknowledged that the feds say there are no terror ties, but the outlet characterized reporting as a new detail. Folks, this is what Islamophobia means."

Watch Hayes' commentary, as aired on Thursday, below.