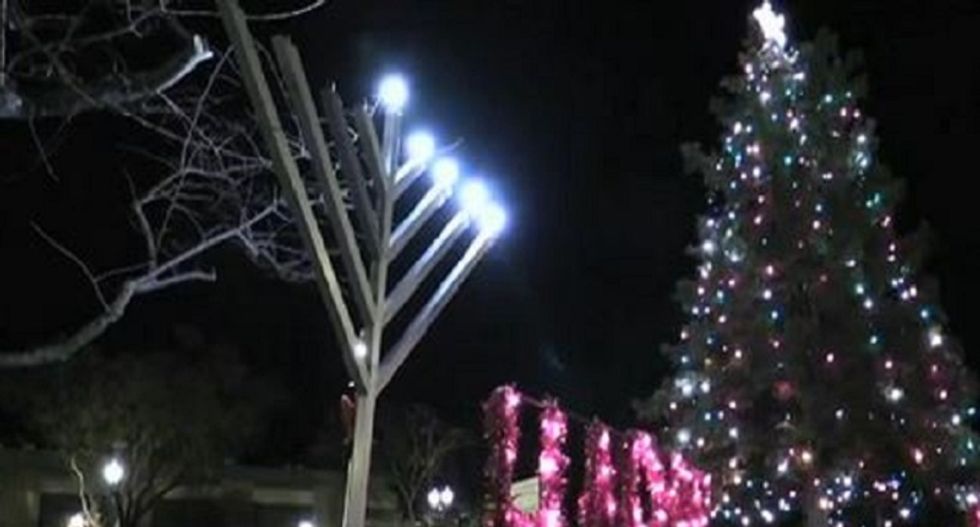 A menorah celebrating the Jewish holiday Hanukkah was removed from a holiday display in a predominantly Jewish town in New Jersey after a Christian woman threatened to sue because there was no nativity scene, the Asbury Park Press reports.

The township of Lakewood has for decades displayed a Christmas tree and menorah, reflecting the demographic of its residents, the Park Press reports. It was abruptly taken down by officials this year though, who feared litigation after Vivian Knight threatened a lawsuit. Now that the issue has become public and sparked an indignant reaction locally, the pastor of her Calvary Lighthouse church is distancing himself from her.

The result, as the Park Press points out though, is that the township now only has a Christmas display, which makes it look like its favoring one religion -- the very scenario that tends to lead to litigation in the first place.

According to Fios1, the menorah was returned to its place by the Christmas tree briefly Thursday, but again hauled away in the back of a pick-up truck. The news outlet offered no details as to why it was removed again.

“Up and down the street there’s Christmas wreaths on every light pole. I don’t really care that much," said shop owner Harold Herskowitz. But, "“the fact that there’s a Christmas tree on the lake (Lake Carasaljo) and a massive Christmas tree on Town Square and no mention of Hanukkah is a serious problem, because it looks like Lakewood is promoting Christianity.”

The Park Press reports Knight couldn't be reached for comment on the matter. But Rev. Wesley L. Lindquist, senior pastor of Calvary Lighthouse, said she had a conversation with him about having a nativity display. But he denies she framed it in a way that made him believe she would threaten a lawsuit.

But at a local government meeting last week, that's just what Knight did, according to Lakewood Mayor Albert Akerman.

“She wanted to make the distinction that the menorah is a religious symbol and the tree is not,” Akerman told the paper. “She threatened to sue.”

In response, Township Attorney Steven Secare recommended the menorah display be removed while he researched what holiday display would be constitutional.

Akerman added that when he told the pastor about the menorah's removal, Lindquist seemed pleased.

“I spoke to him and told him that the only other option was to take down the menorah. And he said, ‘Well, thank you, I appreciate it,’” Akerman told the paper.

Lindquist, however, continued to distance himself from the situation when asked by the Park Press, saying Knight hasn't been to his church in over a decade and he doesn't consider her a member of his parish.

“I don't know if I would associate her, if she hasn't been here in 12 years, with Calvary,” he said of Knight.

But for now, in a town that is nearly 60 percent Jewish, the only holiday on display publicly is Christmas.

“The way it was set up in Town Square was fine. The fact that we’re this Jewish town and have this massive Christmas tree and there’s this little teeny menorah is a little weird, but it’s fine. I was never going to say a word," Herskowitz told the paper. “But now that somebody is insisting on that being taken away, we’re going to insist that it be double the size next year. There should be a 30-foot menorah on Town Square. It’s ridiculous.”

The township has experienced a rapid and recent influx of Orthodox Jews and has been working to strike a balance between its various population groups. But Akerman said the latest development puts things on edge.

“It’s not a matter of religion," he said. "It’s about someone coming up and being destructive to the sense of harmony that existed in the community for many years."