Couple's motive unclear in San Bernardino mass shooting: 'We have not ruled out terrorism' 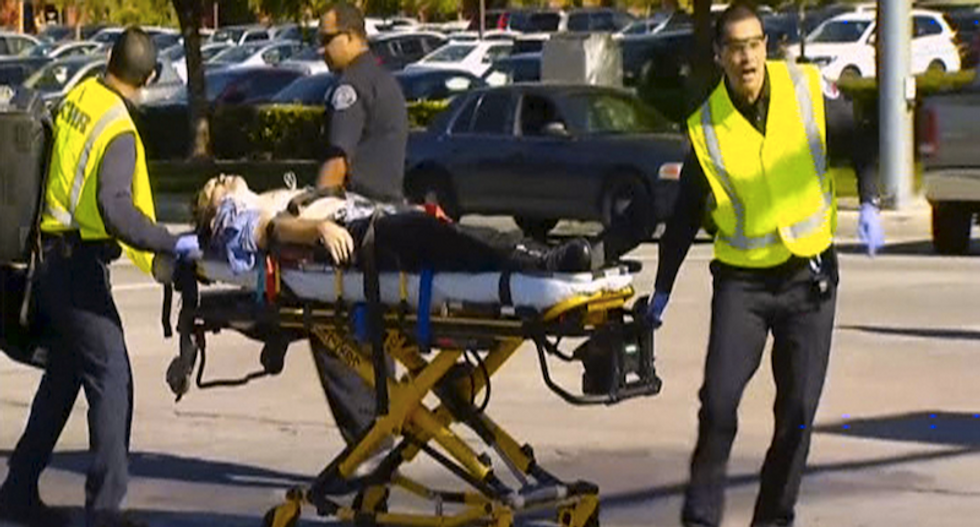 Rescue crews tend to the injured in the intersection outside the Inland Regional Center in San Bernardino, California in this still image taken from video December 2, 2015. (REUTERS/NBCLA.com/Handout via Reuters)

A man and woman armed with assault-style rifles opened fire on the holiday party of his co-workers in Southern California, killing 14 people and wounding 17 others, and then were slain hours later in a shootout with police, authorities said.

The two suspects were identified as Syed Rizwan Farook, 28, and Tashfeen Malik, 27, who San Bernardino Police Chief Jarrod Burguan said were in a relationship, possibly married or engaged. He said they were believed to be the only shooters involved in an attack that required some degree of planning.

While the motive remained unclear, Burguan said, "We have not ruled out terrorism." Farook was U.S. born, while Malik's nationality was still undetermined.

According to the police chief, Farook was a county public health employee who attended the party, held in a conference building on the campus of the Inland Regional Center -- a social services agency -- and at some point stormed out, then returned with Malik to open fire on the celebration. The couple were dressed in assault-style clothing and also placed several bombs at various locations, which police detonated.

The shooting rampage marked the deadliest U.S. gun violence since the massacre at Sandy Hook Elementary School in Newtown, Connecticut, in December 2012, in which 27 people, including the gunman, were killed.

Wednesday's carnage amplified concerns about gun violence and security in the wake of a deadly rampage on a Planned Parenthood clinic in Colorado Springs last week and the attacks in Paris three weeks ago by Islamic State militants that killed 130 people.

So far in 2015, there have been more than 350 shootings in which four or more people were wounded or killed, according to the crowd-sourced website shootingtracker.com, which keeps a running tally of U.S. gun violence.

The attack in San Bernardino, a largely working-class city 60 miles (100 km) east of Los Angeles, appeared to differ from other recent U.S. killing sprees in several ways, including the involvement of two people rather than a lone perpetrator.

A third person seen fleeing from the area of the shootout with the suspects was detained, but Burguan said he was not sure if that person was involved in the attack.

David Bowdich, an assistant regional FBI director, said earlier in the day that authorities had not yet ruled out whether the shooting was an act of terrorism.

At a news conference called by the Los Angeles area chapter of the Muslim advocacy group Council on American-Islamic Relations (CAIR), the brother-in-law of Farook, Farhan Khan, said he was bewildered by the news.

"Why would he do that? Why would he do something like this? I have absolutely no idea. I am in shock myself," Khan said at the news conference in Anaheim, California, south of Los Angeles.

Hussam Ayloush, executive director of CAIR in the Los Angeles area, said the couple had been missing since Wednesday morning and had a 6-month-old baby.

Ayloush appealed to the public not to jump to conclusions about the suspects' motives.

"Is it work? Is it rage-related? Is it mental illness? Is it extreme ideology?" he said. "We just don't know."

The manhunt initially led police to a home in the neighboring town of Redlands, and that police pursued a suspected getaway vehicle that was seen leaving that address back to San Bernardino, where the shootout ensued.

Ayloush told Reuters the couple left their 6 month-old-baby with Farook's mother at that Redlands home early on Wednesday morning and told her they were going to attend a doctor’s appointment for Malik, who he called Farook's wife of two years.

Twelve hours after the attack, the identities of the dead had still not been made public due to a delay in investigators examining the crime scene because of the explosives left there, Burguan said.

The Redlands home remained an active crime scene after police closed off a large area around the residence.

The shooting and ensuing manhunt practically paralyzed San Bernardino, a city of 220,000, with dozens of schools, public offices and hospitals placed on security alert.

President Barack Obama lamented the epidemic of gun violence that he said "has no parallel anywhere else in the world."

And he repeated his call for Congress to pass "common sense gun safety laws," including tougher background checks for firearm sales.