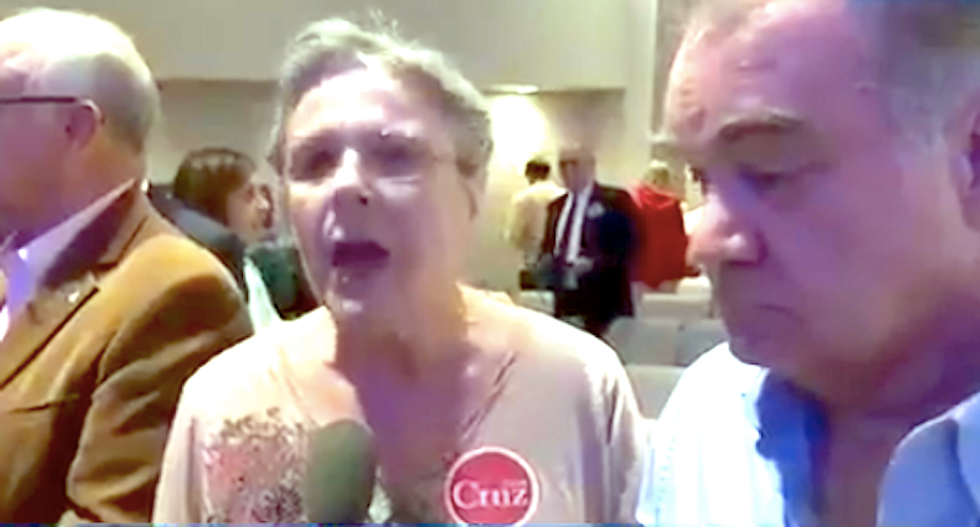 Sen. Ted Cruz (R-TX) has established himself in recent weeks as a strong challenger to frontrunner Donald Trump -- and his supporters are as apparently just as nutty.

A woman spoke to C-SPAN at a recent Cruz rally in Mechanicsville, Virginia, where she explained that she intended to vote for the Texas Republican to drive President Barack Obama, who is constitutionally prohibited from seeking a third term, from office.

“I don't like Obama no more," the woman explained. "He’s ruined our country, ruined Christmas. He’s let the Muslims in. We can’t say that word, we’ve got to be ashamed of it -- and we’re not ashamed people. We’re a proud people, and we’re gonna take our country back. So watch out, Obama! We're coming.”

The reporter asked the woman to explain how Obama had ruined Christmas.

“He’s scared the little children," she said. "They’re not allowed to have Santa Claus in the schools where, you know, it might offend the Muslims. But what about us?”

The woman's loopy rant was reminiscent of remarks made earlier this month by Trump supporter Susan DeLemus, a New Hampshire state representative, during a CNN focus group.

“We’ve got people in positions of power who I know for a fact are liars. Liars!” DeLemus said. “I watch the TV — My president comes on the TV and he lies to me! I know he’s lying. He lies all the time.”

Watch the Cruz supporter's remarks in this interview posted online by C-SPAN: