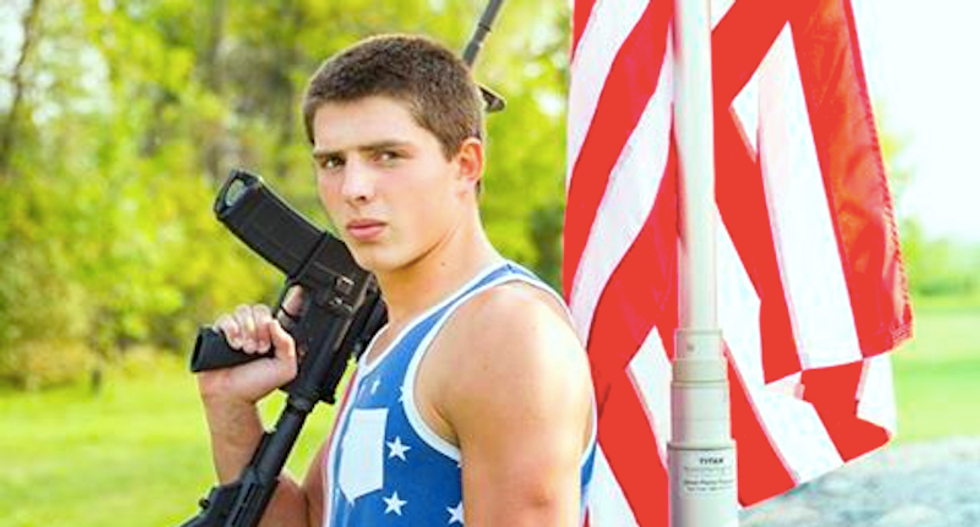 A North Dakota father thought a senior picture would be a safe space for his son to pose with a military-style rifle -- but he's demanding the principal's firing after the yearbook photo was rejected for publication.

Charlie Renville, of Fargo, complained on Facebook that the photo -- which shows his son Josh with his finger ready at the trigger of his "favorite" rifle -- was rejected because school officials believe it "it promotes violence and breaks federal and state law."

The elder Renville lamented on "the state of freedom today" as he demanded the Fargo North High School principal, Andy Dahlen, fired for rejecting the photo.

"I see a kid that loves his nation, loves free speech and loves the 2nd Amendment," Renville said. "The rifle is a rifle he built and it is his favorite rifle. Dahlen just doesn't like rifles, he doesn't believe in or support the second Amendment. He is a far left progressive who is using his position to promote his political agenda and push it on our children."

Renville's Facebook page is littered with conservative viral images, including one that proclaims "political correctness is fascism pretending to be manners" and another one that claims Ronald Reagan "continued to protect gun rights for citizens" even after surviving an assassination attempt.

Reagan, however, offered strong support for a bill named for his press secretary, who was wounded in the 1981 attempt on his life, that established a seven-day waiting period for purchasing guns that was bitterly fought by the NRA and weapons manufacturers.

Renville indicated in his social media post that he had previously clashed with the principal over his family's "traditional conservative values and beliefs" -- but Dahlen said he was following school policies.

“Whether or not I agree or disagree with it is really immaterial,” Dahlen said.

“It’s the combination of those three policies that we’ve interpreted to prevent it," Dahlen said.

Renville insisted the photo of his son posing in an American flag tank-top was no different than photos in the school library of soldiers fighting during war, and he said other schools in the area had trap and skeet teams whose members wear rifle patches on their varsity jackets.

"It's no different than the history books that they have in the library of World War II guys storming the beach on Normandy," Renville said.

The 30-year veteran of the Air National Guard said he planned to keep fighting to get the principal fired.

"So begins the fight for freedom," Renville vowed. "We are only as strong as our weakest link!"

Renville said his son planned to enlist next month in an unspecified branch of the armed services.