Dept. of Justice to investigate Chicago Police Dept.'s use of force 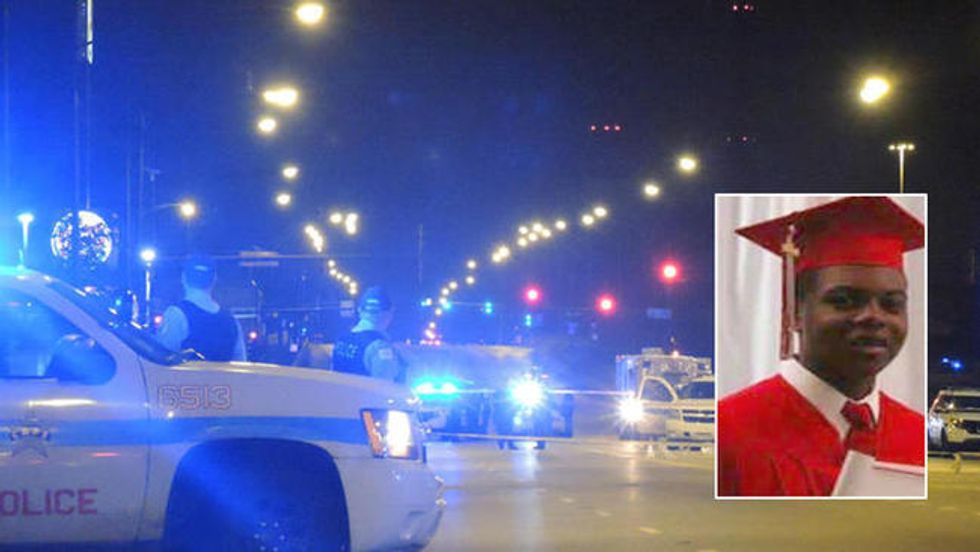 Image: Laquan McDonald, 17, was shot 16 times by Chicago police Officer Jason Van Dyke in October 2014. A judge has ordered the video of the shooting to be made public. (Chicago Tribune)

The U.S. Justice Department said on Monday it will investigate Chicago's police department following protests over the 2014 police shooting death of a black teenager, on the same day prosecutors said they would not seek charges in a similar case.

U.S. authorities would look at the department's use of force, including deadly force, among other issues, U.S. Attorney General Loretta Lynch told a news briefing.

"Our goal in this investigation ... is not to focus on individuals but to improve systems," Lynch said.

The top U.S. law enforcement official said federal officials would be investigating "constitutional violations" in one of the nation's largest police departments.

High-profile killings of black men by mainly white police officers in U.S. cities have prompted a national debate and protests about the use of excessive force by police.

Two hours after Lynch's briefing, Cook County State's Attorney Anita Alvarez gave a detailed presentation to reporters explaining why she would not seek charges in another 2014 police shooting death of a black man.

Michael Oppenheimer, an attorney for Johnson's family, called Alvarez' explanation a "joke," and protesters took to the streets Monday evening.

Alvarez, who has been under fire for her handling of the McDonald case, said Ronald Johnson III, 25, was holding a gun and fleeing arrest when he was shot by Officer George Hernandez on Oct. 12, 2014.

The grainy video, which has no audio, showed Hernandez firing at Johnson as he ran into a park. Alvarez said Johnson had been asked repeatedly by multiple officers to drop his weapon, and that a 9mm semiautomatic pistol was found with Johnson after he was shot.

Prosecutors also showed reporters an image with a red circle around Johnson's hand, saying that forensic experts clarified images of a weapon.

Oppenheimer said Johnson did not have a gun and mocked Alvarez for relying on an Independent Police Review Authority (IPRA) investigation of the case. Chicago Mayor Rahm Emanuel ousted the head of IPRA at the weekend.

Demonstrators gathered on Monday in the neighborhood where Johnson was killed and called for Alvarez to step down.

Johnson's mother, Dorothy Holmes, told the crowd the decision not to charge Officer Hernandez was "bogus."

"I ain't giving up," she said, holding a photo of Johnson inscribed with the words "Beloved Son."

"I'm going to keep going until she (Alvarez) get out of there ... My son's life mattered to a lot of us because if it didn't, we wouldn't be out here," Holmes said.

Alvarez said officers were at the scene due to an earlier shooting. Another officer had tried to arrest Johnson but he had pulled away, knocking the officer over, before running off, Alvarez said.

"The prosecution could not establish beyond a reasonable doubt that the actions of Officer Hernandez were not reasonable and permissible," she told reporters.

Responding to questions about why Johnson was shot in the back, Alvarez said Johnson could have turned and fired at Hernandez or other officers, and that his gun was linked to a 2013 shooting.

Mayor Emanuel said on Monday the Johnson shooting was a "tragedy." Emanuel, who initially disagreed with calls for a federal civil rights investigation and is under pressure from critics over the McDonald case and, also said Lynch would have the city's "complete cooperation."

The Justice Department investigation of Chicago police follows other high-profile investigations of departments in Ferguson, Missouri, and in Cleveland. Baltimore police are also under federal scrutiny.

U.S. Rep. David Schweikert might end up being a case study in how escalating extreme rhetoric to avoid the wrath of former President Donald Trump and his voters turns from an advantage to a liability because of redistricting.

Schweikert won his seat in Congress in the GOP wave year of 2010, knocking off incumbent Democrat Harry Mitchell, who had improbably represented the reliably Republican district for two terms.