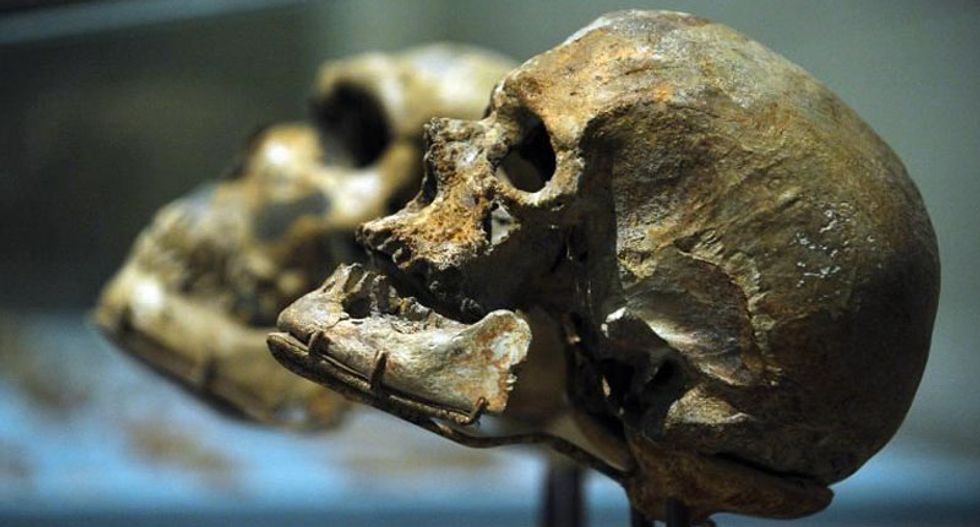 The skull of the Homo Sapiens Cro-Magnon 1 (R), and the Homo Neanderthalensis La Ferrassie 1 seen on display at the Smithsonian National Museum of Natural History in Washington, DC on March 17, 2010 (AFP)

A stark demonstration of the dramatic changes that have swept through the science of human evolution will be revealed this week at London’s Natural History Museum. A wall of skulls has been built at the entrance of its new human evolution gallery, graphically showing how our understanding of our seven-million-year journey from ancient apeman ancestors to Homo sapiens has been transformed in recent years.

In just over a decade an unprecedented number of new species have been uncovered by palaeontologists, from the Hobbit man of Flores to the Denisovan cavemen of Siberia. Most will be displayed on the wall of skulls.

“The skulls will be placed in rough chronological order, but we will not try to connect these species and make an evolutionary tree. We simply do not know how some of these finds relate to each other yet,” said Chris Stringer, lead curator of the new gallery, which opens on Friday. “It is a measure of the remarkable rate of new finds that are being made. In a way, we are being spoiled for riches. It is certainly great for science. Our image of ourselves, our evolution and our spread across the planet are being transformed.”

Finds to be included in the new gallery include copies of the remains of Homo naledi and Australopithecus sediba, discovered in caves by teams led by Lee Berger, of University of the Witwatersrand . The former species, whose age is still unknown, includes up to 15 individuals who Berger believes were deliberately interred.

By contrast, the 2010 discovery of Denisovan hominins, thought to be 60,000 years old, was made purely by analysing DNA in their bones. Then there arethe remains of the Hobbit human, Homo floresiensis , discovered in 2003, which is believed to have grown to little more than a metre in height.

The museum’s own collection will also be displayed in the new gallery and will include the 9,000-year-old remains of Cheddar Man, whose skeleton wasfound in Cheddar Gorge, Somerset, as well as older remains of individuals who evidently had been eaten by cannibals. In addition, the “Forbes Quarry skull” from Gibraltar, believed to be from an adult Neanderthal female, was studied by Darwin, who called it “wonderful”.

The cause of the recent dramatic rise in rates of palaeontological finds is thought to be partly connected with the opening up of new terrains. The fall of apartheid has helped to make South Africa a mecca for palaeontological searches. However, the main driver has undoubtedly been technological. In particular, the ability to determine the genetic make-up of a fossil from a few grams of bone has transformed researchers’ abilities to distinguish species and identify new ones.

For example, in 2010 scientists – after analysing tiny pieces of human bone and teeth in Denisova cave in the Altai mountains, in Siberia – realised they contained DNA of a previously unknown kind of human . These hominins, now known as Denisovans, were related to Neanderthals but also passed on a small percentage of their DNA to groups of modern humans, including Melanesians and Australian Aborigines.

“The pieces of bone were tiny, and although people had been excavating in the cave for a long time and had made finds, there was no way they could know these came from a completely new type of human until DNA technology revealed the truth,” added Stringer.

On top of these techniques, scientists such as Lee Berger are using Google Earth to search for promising sites for new excavations while drones have also begun to make an impact in surveying for ancient human remains. One project recently launched in Kenya – where some of the most important fossil finds ever have been made – allows the public to play a part in finding new sites. For example, as part of the online citizen science project Fossilfinder, volunteers sift hundreds of thousands of images taken by drones and kites of the Turkana Basin, a key area for fossils of early human ancestors.

“The rate of new fossil finds is not going to diminish, which is great for understanding our species’ evolution but makes things tricky when you are designing a human evolution gallery,” says Stringer. “It is clear we will have to be flexible and expect the unexpected.”