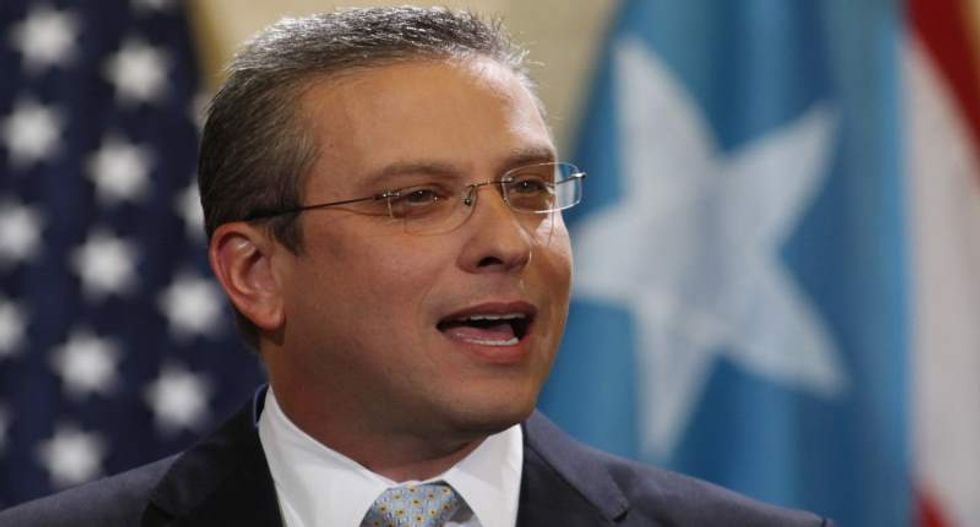 Puerto Rico Governor Alejandro Garcia Padilla, buffeted by a struggling economy, a federal corruption probe and weak poll numbers, will announce this week whether he plans to seek a second term, his spokesman told reporters on Monday.

With his administration facing cronyism charges and Puerto Rico mired in deep recession, Garcia Padilla is considered a long shot to win a second four-year term in next November’s election.

He has also faced opposition from officials, particularly mayors, within his own Popular Democratic Party, (PPD) who have said he failed to consult them on key issues affecting their towns.

At a news conference on Monday, the governor's public affairs officer, Jesus Manuel Ortiz, said Garcia Padilla would announce by week’s end whether he plans to run. But he gave no exact timetable for the decision.

Puerto Rico, a U.S. commonwealth facing $72 billion in debt, narrowly avoided default last week on debt guaranteed by its constitution, but faces another such payment on Jan 1..

Garcia Padilla said the island must redirect revenues from some bonds to service constitutionally guaranteed debt and provide essential government services for the island, whose poverty rate hovers around 45 percent.

He has demanded concessions from creditors while asking the U.S. government for legislative aid and avoiding significant job cuts.

That has made him unpopular among bondholders. But voters have cooled on the governor as well as the island’s woes persist and federal help has remained elusive. An October poll by newspaper El Nuevo Dia pegged his public approval rating at just 12 percent.

Especially damaging to Garcia Padilla’s re-election chances is opposition within his own party, particularly among the mayors. Under Puerto Rico's electoral system, all political offices are contested on the same day, so whichever party is stronger on Election Day is likely to enjoy four years of control at all levels of government.

As a result, weak governors tend to face pushback from mayors, whose support is crucial to any campaign because they serve as a candidate’s primary link to voters.

If Garcia Padilla does not run, his former secretary of state, David Bernier, is expected to run for the PPD. For the rival New Progressive Party, lobbyist and political advocate Ricky Rossello and Puerto Rico’s representative in Congress, Pedro Pierluisi, have announced gubernatorial campaigns.

(Reporting by a contributor in San Juan and Nick Brown in San Juan; Editing by Peter Cooney)