FBI chief: San Bernardino killers were radicalized before they met 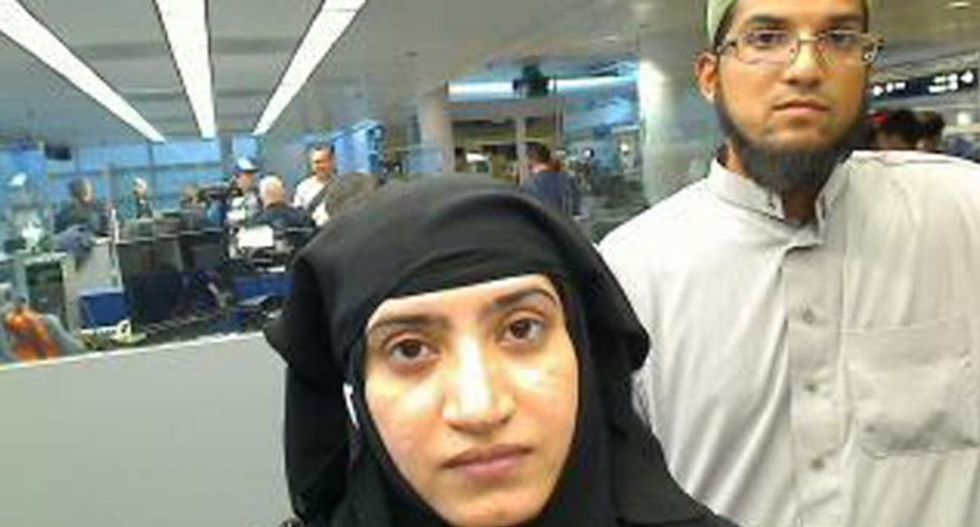 An image released by US Customs and Border Protection on December 7, 2015 shows Syed Farook (R) and Tashfeen Malik, shooters in the December massacre in San Bernardino, California, as they transit Chicago's O'Hare International Airport in July 2014 (AFP Photo/)

The Muslim husband and wife who killed 14 people in an attack on a year-end party in San Bernardino, California were radicalized at least two years ago, before they met online, FBI Director James Comey said.

The Federal Bureau of Investigation's probe has determined that US-born Syed Farook and Tashfeen Malik, a Pakistani national, were inspired by foreign terror groups and discussed "jihad and martyrdom" as early as 2013, Comey said.

The investigation "indicates that they were actually radicalized before they started courting or dating each other online," he told the Senate Judiciary Committee during a hearing.

"And online, as early as the end of 2013, they were talking to each other about jihad and martyrdom before they became engaged and then married and lived together in the United States."

The revelations by Comey appear to counter an earlier theory studied by investigators that Malik may have radicalized her husband, appearing as the driving force behind the attacks.

The 29-year-old Pakistani woman is believed to have pledged allegiance to the Islamic State in a Facebook post made under another name, around the time of the shooting, according to reports.

The assailants shot dead 14 people and wounded another 21 at a party full of Farook's co-workers, before dying in a shootout with police hours later.

Authorities said the couple, who had a six-month-old baby, had amassed a huge arsenal in their California home including thousands of rounds of ammunition, 12 pipe bombs, and bomb-making material.

Comey said it was believed they were "inspired by foreign terror organizations" and the FBI was seeking to determine whether anyone assisted, supported or equipped them.

"And we're working very, very hard to understand, did they have other plans."

As of now, he said, authorities have not found any IS "cells or networks" in the country.

However investigators have been looking into Farook's ties with a longtime friend and neighbor, Enrique Marquez, suspected of purchasing two assault rifles used by the couple in their murderous rampage.

According to US Senator James Risch, Enrique told investigators that Farook and he plotted an attack three years ago but aborted the plan after a wave of US counterterrorism arrests.

"He has admitted that in 2012 they had something in mind and they didn't do it because there had been some immediate arrests by the counterterrorism people," Risch, who sits on the Senate Select Committee on Intelligence, told CNN.

"And as a result of that they got cold feet."

The precise nature or target of the plot was unclear, Risch said.

Marquez, a convert to Islam whose home was raided at the weekend, is currently being treated in a psychiatric ward. He has yet to be charged in the probe and could potentially be offered a plea bargain if he cooperates.

He and Farook were neighbors in the Californian town of Riverside for around a decade, according to The New York Times. They were also loosely related by marriage, according to the paper, which said Marquez last year married a woman named Mariya Chernykh, sister to Farook's sister-in-law.

Farook and Malik traveled together to the United States in July 2014, Farook with his US passport and Malik with her fiancee visa inside her Pakistani passport.

Comey said authorities were trying to determine if their union was a marriage arranged by extremist operatives, in order for Malik to gain access to the country.

"It would be a very, very important thing to know," he said.

Comey's revelations were part of broader testimony about FBI oversight and what he called "a staggering array of threats" facing the country.

He said the FBI was focused intently on the threat of "the radicalization in place" of people who become inspired, influenced or directed by a terrorist group or extremists.

But finding such homegrown violent extremists is a "very hard thing," Comey said.

His comments follow up on an appeal from President Barack Obama for high-tech leaders to help make it harder for extremists to escape from the law using technology.

Comey pointed to an attack in Garland, Texas in May that was thwarted by fast-acting police before shooters could kill anyone.

He said one of the assailants had exchanged 109 messages with a known overseas terrorist shortly before the shooting, which targeted a contest involving cartoons of the Prophet Mohammed.

But seven months after that attack, in which the two gunmen were shot dead by police, "we have no idea what was said because those messages were encrypted," Comey told the panel.

"That is a big problem."

Even when devices are recovered from suspects, the data within can remain encrypted and unreadable to law enforcement, he warned.