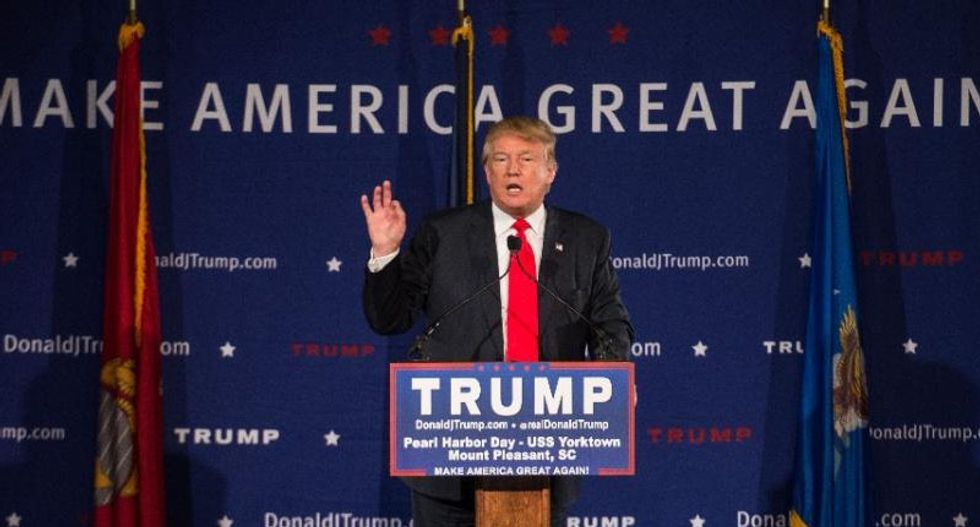 A firestorm erupted Tuesday over Donald Trump's call for a ban on Muslims entering the United States as religious leaders, the White House and his rivals on the presidential campaign roundly condemned the proposal.

The leading candidate for the Republican presidential nomination made the provocative remarks -- just his latest on a range of topics on the campaign trail -- after last week's shooting that left 14 dead in California by a Muslim couple said to have been radicalized.

In a rare primetime speech to the nation from the Oval Office on Sunday, President Barack Obama called the attack in San Bernardino an "act of terrorism" and vowed to defeat extremism, but also stressed that it was not "a war between America and Islam."

Less than 24 hours later, Trump's bombastic bid for the White House plumbed what critics called a new low and triggered calls for him to be barred from taking power after he urged a "total and complete shutdown of Muslims entering the United States until our country's representatives can figure out what is going on."

In a speech late Monday, the 69-year-old billionaire real estate mogul and reality television star doubled down on his initial statement.

"We have no choice," Trump said, saying that Islamist radicals want to kill Americans.

"It's going to get worse and worse. We're going to have more World Trade Centers," he said, referring to the deadly attacks on September 11, 2001.

His comments were condemned by the White House as "totally contrary" to American values and similarly slammed as far afield as London and Cairo, where Egypt's official religious body Dar al-Iftaa denounced them as "extremist and racist."

The strongest reaction came in the United States, including from Trump's rivals in the race to run for the White House in 2016.

Trump was the "ISIL man of the year," said Graham, referring to the extremist Islamic State group.

"Do you know how you win this war? You side with people in the faith who reject this ideology, which is 99 percent," Graham told CNN, before invoking Trump's campaign slogan -- "make America great again."

"And do you know how you make America great again?" asked Graham, who is lagging badly in the nomination race.

Hillary Clinton, the Democratic presidential frontrunner, tweeted: "Declaring war on Islam or demonizing Muslim Americans is not only counter to our values -- it plays right into the hands of terrorists."

And Rick Kriseman, the Democratic mayor of Saint Petersburg, Florida, tweeted: "I am hereby barring Donald Trump from entering St. Petersburg until we fully understand the dangerous threat posed by all Trumps."

Muslim leaders in the United States also hit out at Trump.

Sohaib Sultan, Muslim Life Coordinator and Chaplain at Princeton University, was scathing, drawing parallels between Trump and the radical ideology of the Islamic State group.

"ISIS is to Islam what Donald Trump is to American values: a complete distortion of everything that we as a country and a society stand for."

He added: "I think he's clearly disqualified himself from being the president of the United States."

But Sultan also lambasted other Republicans.

Nihad Awad, executive director of the Council on American-Islamic Relations, added: "Donald Trump sounds more like a leader of a lynch mob than a great nation like ours."

But Trump was characteristically unrepentant Tuesday, comparing the proposed ban to "presidential proclamations" made by Franklin D. Roosevelt during World War II.

Asked in an interview on MSNBC's "Morning Joe" program if his proposal went against treasured American values, he responded: "No, because FDR did it!"

But that failed to quell the firestorm, with Jeff Bezos, the Amazon founder who also set up the space company Blue Origin, tweeting: "Will still reserve him a seat on the Blue Origin rocket. #sendDonaldtospace."

The British government also weighed in.

Prime Minister David Cameron "completely disagrees" with the remarks, which are "divisive, unhelpful and quite simply wrong," a spokeswoman for the Conservative leader said.

In Geneva, the United Nations refugee agency -- though not directly responding to Trump's remarks -- warned that rhetoric in the US presidential campaign was threatening a key refugee resettlement program in the United States.