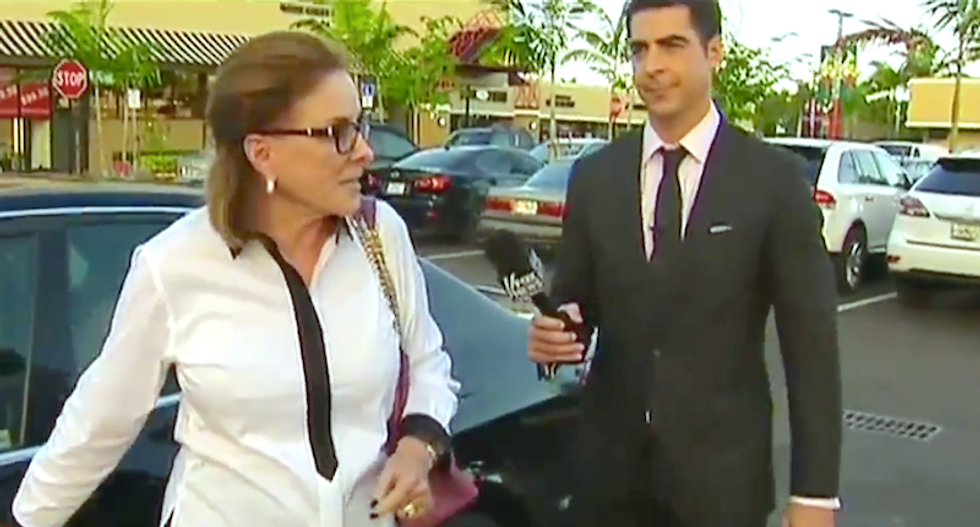 A Florida mayor slapped down a Fox News correspondent's attempt to conduct one of his trademark "ambush" interviews about a lawsuit over a family's massive display of Christmas lights.

Mark and Kathy Hyatt decorate their home in Plantation with more than 200,000 lights and a 20-foot Ferris wheel, attracting hundreds of visitors each weeknight and sometimes thousands on weekends.

The holiday amusement park is lit up each year the night after Thanksgiving and remains open for six weeks, and the city shuts down a portion of their street and stations a police officer each night to conduct traffic.

City officials have tried for years to get the couple to scale back their display or pay some of the city's costs, but they have refused -- so the city filed a lawsuit against the Hyatts to force them to shut down the spectacle.

Fox News correspondent Jesse Watters visited the display and spoke with some of the delighted visitors, as well as the Hyatts -- who said the city has placed a lien against their house for "$7,000, plus taxes, penalties, interest."

Mark Hyatt said they have raised $10,000 for charity over the years but does not charge admission, and he suggested the mayor wants them to ask visitors to pay and then share the proceeds with the city.

Watters reported that the mayor, Diane Veltri Bendekovic, had clashed with the Hyatts over unspecified partisan political issues.

"There’s some political situations that are going on, being Republicans and Democrats, and she’s just not liking this couple," Watters reported, without explanation.

The correspondent ambushed Bendekovic in a grocery store parking lot, and she grimaced when he introduced himself.

"Why are you suing a family for having Christmas lights?" Watters asked.

The mayor said she would like to answer his question, but said she was not able to comment on pending litigation.

"Florida Bar Association says that you can comment during a proceeding as long as you don’t prejudice one side or the other," Watters said.

Bendekovic declined further comment on the lawsuit, and Watters lectured the mayor on proper uses of taxpayer money as she loaded groceries into her trunk.

"This isn't a good use of taxpayer money to go after homeowners for a few Christmas lights, is it?" Watters said. "I don’t think Santa’s going to be happy with you."

"I don’t think you should be voicing your opinion what Santa wants and what Santa doesn’t want, so," Bendekovic said.