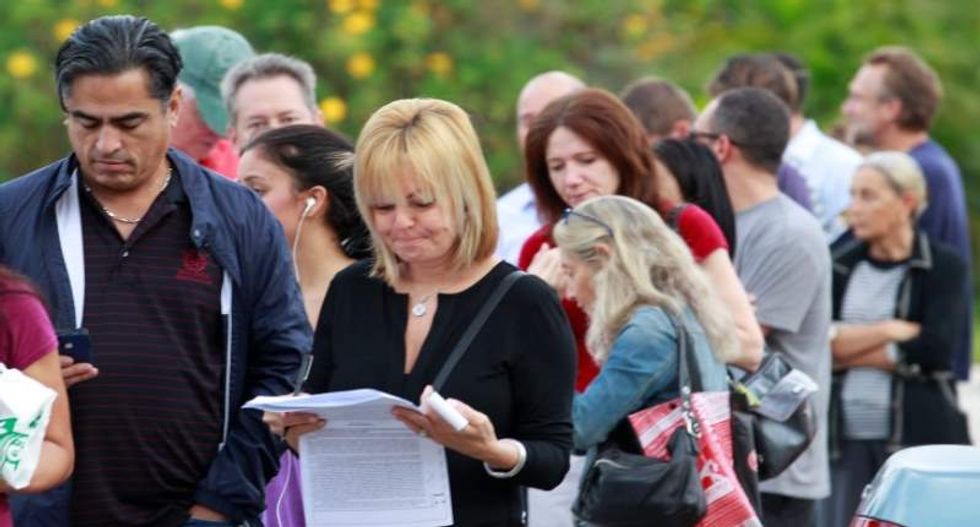 Voters line up to cast ballots in the U.S. presidential election in Boca Raton, Florida on Nov. 6, 2012. Photo by Joe Skipper for Reuters.

The Florida Supreme Court on Wednesday approved a plan to overhaul state congressional boundaries that a judge had declared unconstitutionally gerrymandered, a move that jeopardizes several incumbents in the 2016 election.

The decision, following long-running litigation and legislative wrangling over the state's 27 seats in the U.S. House of Representatives, could see further court challenges.

The redrawn maps leave several incumbents vulnerable, from the state's northern Panhandle to South Florida, and create an opportunity for Democrats to pick up a seat in the Tampa Bay swing region on the central Gulf coast.

"The democratic process prevailed today in a landmark victory for Florida citizens," Pamela Goodman, president of the League of Women Voters of Florida, one of the groups that challenged the boundaries in court, said in a statement.

Political dominoes have been falling since a state judge last year declared the maps drawn by the Republican-controlled Legislature to have "made a mockery" of anti-gerrymandering provisions in the state constitution.

Rising stars from both parties now face daunting re-election prospects - Gwen Graham, a Democrat from north Florida, and Orlando-area Republican Daniel Webster, who earlier this year was a contender to become speaker of the U.S. House.

"I'm disappointed by the court's decision," Graham said in a statement. "It's likely these maps will still be challenged in federal court — and I will make a decision about how to best serve the people of North Florida once the maps have been completely settled."

Democrats hope to pick up a seat in Tampa Bay, where Charlie Crist, the state's former Republican governor who later changed parties, is running for the seat currently occupied by Republican David Jolly.

Jolly opted not to seek re-election in a district now unfavorable to Republicans and is running for the U.S. Senate.

Brown, one of three black members of Congress from Florida, said she was contesting the new maps in federal court because the boundaries diluted minority voting strength.

“Today’s ruling and the proposed congressional map is a direct attack on minority voters and a clear example of voter retrogression and disenfranchisement," she said in a statement.

There are currently 17 Republicans and 10 Democrats in the state's U.S. House delegation.