Fox hosts: Atheists are 'sucking the joy out of Christmas' by expecting tolerance 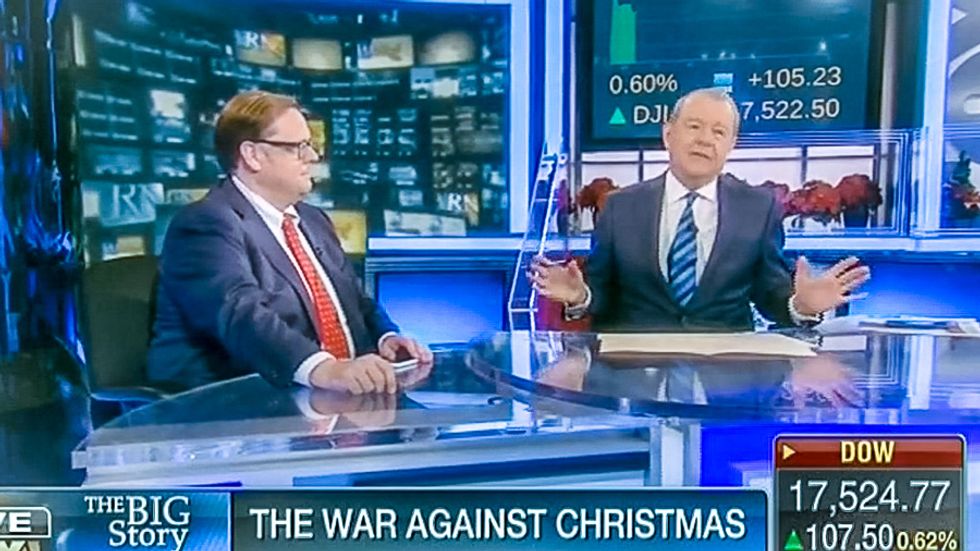 Fox hosts Stuart Varney and Todd Starnes complained on Tuesday that liberals and atheists were "sucking the joy out of Christmas" by defending their right to be free from government-sponsored religion.

Varney noted on his Fox Business show that there had been a "victory for Christmas" after a Maine high school recently reversed itself and allowed a teacher to display a Hello Kitty Christmas tree in her classroom.

"In this case, no one even complained and the principal was just very concerned that someone might take offense," Starnes explained. "And [the principal] actually told the teacher who had had a Christmas tree in her room for 30 years -- 30 years! -- that this tree might cause someone to be offended because it represents a religion."

However, Starnes suggested that the Christmas tree was not religious in nature because it had Hello Kitty ornaments.

"She said that they're just sucking the joy out of Christmas," Starnes remarked. "And that's exactly what they're doing."

"Sucking the joy out out of Christmas," Varney agreed with a sigh.

Starnes warned that Europe was also in danger of losing its Christian values.

"And look at what's filling the void," he said. "You've got the rise of Islam across Western Europe right now. I think we need to start paying really close attention because here in this country, we are right on the cusp of that purge, getting rid of Christianity from the public marketplace. And what's going to fill the void? It will be secular humanism."

"The issue here is do you have the courage to fight these atheists and these progressives," Starnes added.

Watch the video below from Fox Business News, broadcast Dec. 23, 2015.