'Give me a break': Ben Carson bristles when asked if terrorists might simply lie to gain entry into the US 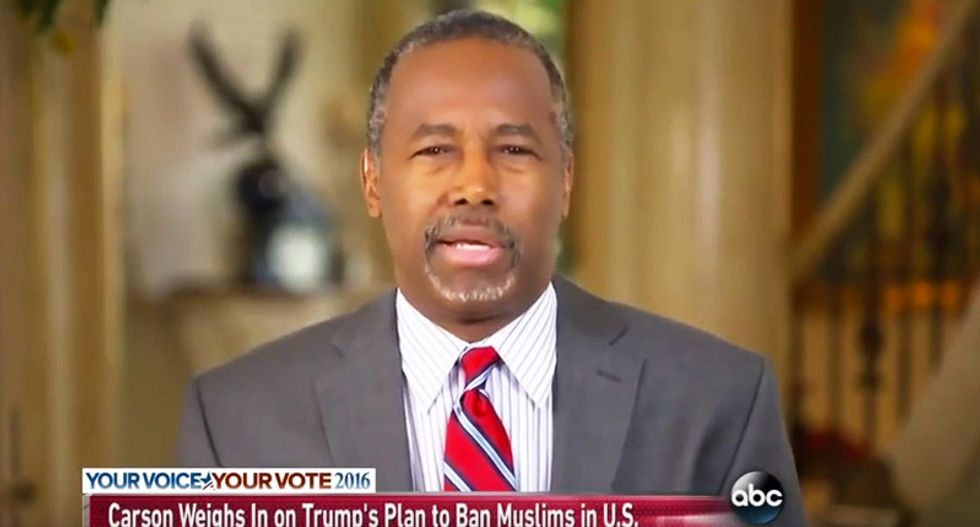 Appearing on ABC's This Week, GOP presidential candidate Ben Carson attempted to finesse somewhat conflicting statements he has made regarding monitoring Muslims attempting to enter the U.S., before becoming flustered when asked if terrorists might simply lie to gain entry.

Pressed by host George Stephanopoulos over his flip-flops in a 24-hour period  -- one day calling for monitoring Muslims in the U.S. and the next day saying it was a "ridiculous idea" --  Carson attempted to explain.

"I'm not talking about following them with the FBI," Carson explained, with Stephanopoulos following up by asking if government officials should ask for an itinerary when Muslims visit.

"Yeah.  I mean we should be able to find them. We should know what they're doing here," Carson replied.

“But won’t a terrorist just lie?” the host asked.

The normally placid Carson then became more animated as he attempted to explain himself.

"Well, again, we're going to have to be a little smarter," he countered as he became sarcastic. "I mean, you've probably seen some of the questions that they ask in the screening. 'Have you ever been a terrorist? Are you planning a terrorist attack? Have you been trained with tactical--.' Aw, give me a break. You know, we have to -- why don't we go to the Israelis and ask the  how they do it? Why do we have to reinvent the wheel?"

Watch the via below from Mediaite: