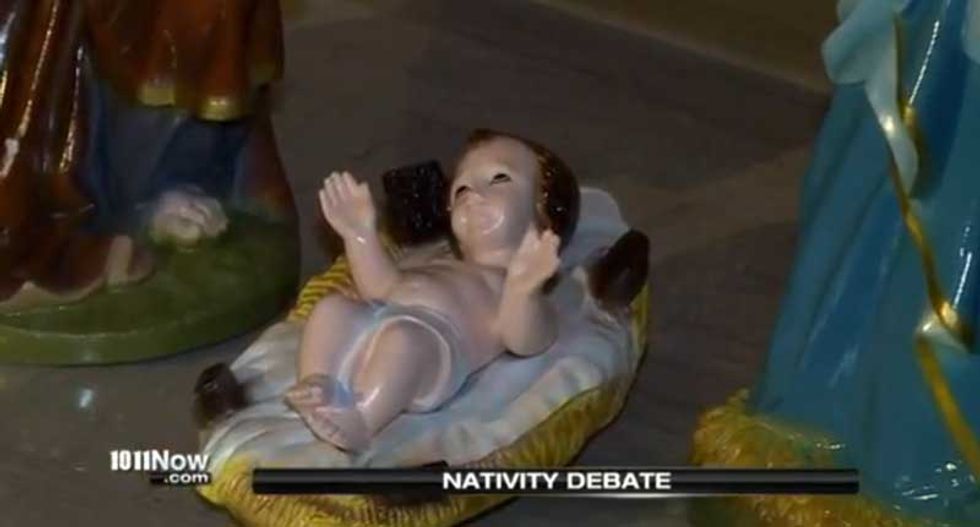 A coalition of atheist and humanist groups last summer booked up all available exhibition space around Christmas Day in Lincoln, to set up their own exhibit

When Christmas comes to Lincoln, Nebraska this year, Mary, Joseph and the baby Jesus will find there is no room in the inner halls of the state capitol – and no manger either.

Related: Conservatives should blame capitalism for the 'war on Christmas' | Steven W Thrasher

Instead, there will be an 8ft “happy humanist” next to a “reason tree” dedicated to science and “human intellectual achievement”.

In Lincoln, amid the supposed “ war on Christmas ” bemoaned each year by the political right, it appears the atheists really have stolen Christmas.

On Friday, a classic Christian nativity scene was erected in the rotunda of Nebraska’s capitol building. The state’s lieutenant governor, Mike Foley, was scheduled to attend.

But on 18 December the nativity will have to be moved, to make way for exhibits organised by a coalition of atheist and humanist groups who last summer booked up all available exhibition space in the rotunda for the week around Christmas Day.

From 19 to 26 December, therefore, the capitol will host an exhibition called Reason this Season, organized by Lincoln Atheists, Omaha Atheists and several other humanist associations.

“It’s going to be a big shindig,” Chris Clements of Lincoln Atheists told the Guardian. “Our message is that it’s a secular government and religion has to stay separate from that. And it’s meant to communicate that atheists are not bad people – we can be good without God.”

One of the main exhibits will be a table holding a miniature church, a miniature mosque and symbols from other religions including Judaism and Buddhism, separated from a miniature White House, Statue of Liberty and US Capitol by a model wall – a stark reminder of the separation of church and state that is enshrined in the first amendment to the constitution.

With a little more subtlety – but not much – a large pine “reason tree” will be decked with messages promoting free opinion and scientific and philosophical thought.

Other exhibits will include a seasonal scene of a snowy model village and the “happy humanist”, a large cutout in the shape of a person with a quote from Thomas Paine, a key influence on the founding fathers who vehemently argued against institutionalised religion.

Clements said the atheist groups were excluded from the state capitol last year, after the nativity scene went up.

“So this year we wanted to make sure we had the opportunity to be in,” he said.

Last year, around the US, there were a number of clashes over seasonal displays. A “zombie nativity” scene in Ohio was ordered removed ; a satanic display in Florida was vandalized . In 2012, a live nativity in California was discontinued after protests from atheist groups.

In 2014, the nativity scene in the Nebraska capitol caused much debate. It was sponsored by the Omaha branch of the Thomas More Society , a national Christianity-based, anti-abortion, nonprofit advocacy group which is also responsible for the nativity scene this year and whose website announces its mission to help “keep the Christ in Christmas”.

The fact that the scene is sponsored by a private group means it does not violate the official separation of church and state within the headquarters of the state government, capitol building administrator Bob Ripley told the Lincoln Journal Star.

However, any group is only allowed one week per exhibition. So, earlier in 2015, the atheist groups made sure they were first in line to book up Christmas week.

“We would have liked to have been there over Christmas,” said Christine Delgado, an attorney with the Thomas More Society. “But it really doesn’t matter what week it is.

One representative of the Thomas More Society, Martin Cannon, said in a local report the atheist groups were “not willing” to share the space. Clements denied that.

Tom Gray, who recently retired as a lieutenant colonel after 23 years in the US army, including two tours in Afghanistan, is involved in the secular display on behalf of two groups, Omaha Atheists and Offutt Humanists , the latter a group for non-religious military members serving at the nearby Offutt air force base.

“There are a lot of religions that discourage the free exchange of ideas,” he said. “And vocal religious believers who seek to influence legislatures and try to impose religion in public schools. And there is a pretty strong assumption here in the mid-west that everyone is Christian and attends church and we wanted to say something different.

“But it’s not intended to be a poke in the eye to religion.”

Gray said that in the spirit of open-mindedness and a desire to understand all religions and the absence of religion, members of his group would visit the Islamic Center of Omaha on Saturday.

The center has been defaced three times since the summer, most recently after the terrorist attacks in Paris, when a mystery vandal sprayed the peace sign with a depiction of the Eiffel Tower.

“It’s like saying they are responsible,” said Gray. “There has been a lot of hate speech and there needs to be more tolerance.”

Watch a video report about this story below: