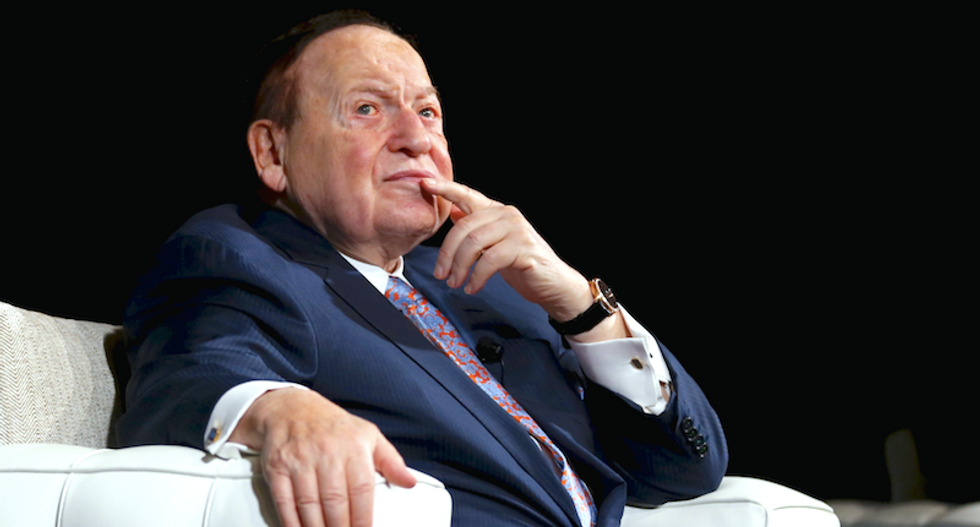 "It was very nice," the gambling tycoon told Reuters when asked if he had met Trump, the current front runner in polls of Republican voters, earlier in the week. "He was very charming," Adelson said in an interview in Macau, saying the pair had discussed Israel during their talk.

The 82-year-old Chief Executive of Las Vegas Sands Corp, the world's biggest gambling company by market value, made his comments a few days after hosting the latest debate among Republican Party presidential candidates at the Venetian Hotel in Las Vegas, where he is based.

Courted by most of the Republican candidates and widely expected to be the party's top donor in the 2016 presidential election, Adelson said earlier on Friday during a news conference that he may wait until next February's primaries to decide who to back. He described the field of Republican candidates as "all very good."

Some 14 candidates are still in the race for the Republican Party nomination. The latest Reuters/Ipsos poll showed Donald Trump leading the field with support of 35 percent of Republican voters, with Ben Carson second on 12 percent, followed by Ted Cruz and former Florida Governor Jeb Bush tied at 10 percent.

"We like a lot of the candidates, some more than the others," Adelson said during the interview. "It's changing every day. I saw in the news today that Trump said his percentage approval was 41 percent. Out of 14 candidates, 41 percent is unheard of."

Asked what characteristics he would like the Republican party's nominee to embody, Adelson said, "They have got to be able to win."

Speaking in an interview in Macau, the world's largest gambling hub, ahead of the formal opening of his new St Regis hotel in the former Portuguese colony, Adelson also made his first public comments confirming his family's acquisition of the Las Vegas Review-Journal newspaper.

The $140 million deal to buy the largest paper in the state of Nevada, an important swing state, had been shrouded in secrecy.

"This newspaper has been making money... we left the (everyday) operation in the hands of the owner from who we bought it," said Adelson, whose family has experience of Israeli newspaper ownership and is known for his ardent support of Israel.

"We are not going to hire an editor, we left it up to them (current management), period. We may take some of the positive characteristics of our Israeli newspaper and add them to there but that's all just suggestions."

Adelson said he discussed Israel with presidential candidate Trump during their meeting.

"He (Trump) had talked about potentially dividing about Jerusalem and Israel, so I talked about Israel because with our newspaper, my wife being Israeli, we are the few who know more about Israel than people who don't," Adelson said.

Adelson's Las Vegas Sands company derives the bulk of its revenue from casinos in the global gaming hub of Macau, an hour's ferry ride from the Asia financial center of Hong Kong.

Discussing business prospects there during the interview, Adelson said that a long-term slide in Macau's gaming market was either close to bottoming out or had already bottomed out, with a turnaround in sight in the first quarter of 2016 after 18 consecutive months of revenue declines.

Revenue in Macau, the only place in China where casino gambling is legal, has long been squeezed by a combination of slowing economic growth and a broader crackdown on corruption targeting illicit money outflows.

"We are at the beginning of the shift in the cycle from a recession-type economy to a bottoming out, and I think the economy and Macau's fortunes will turn around," he said.

Adelson said he expected the opening in 2017-18 of a bridge that will link the southern Chinese city of Zhuhai to Macau and the Asia financial center of Hong Kong will further boost business in the gambling hub.