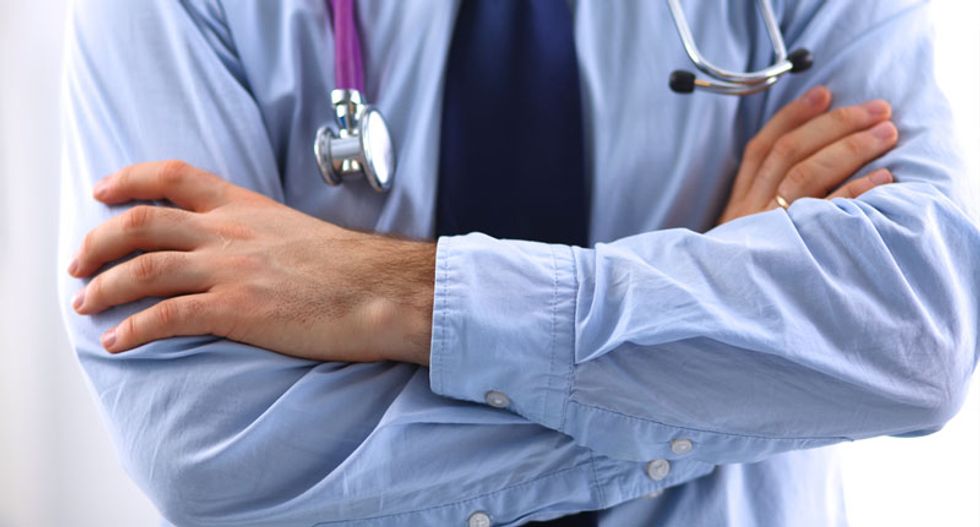 Doctor with his arms crossed (Shutterstock)

He was a trusted heart specialist who stepped in swiftly whenever he thought his patients were in peril, rushing them in for sophisticated tests and the promise of life-saving surgery.

But federal investigators found that behind his professional demeanor, patients were falling victim to a massive confidence trick driven by greed.

Dr Harry Persaud, 56, protested his innocence to the Guardian on Tuesday after it was revealed that the Ohio-based cardiologist will spend 20 years in prison for putting patients through invasive tests and open heart surgery that they did not need – billing insurers for millions in the process.

He claims the US government has targeted him under the auspices of President Obama’s Affordable Care Act, to try to force doctors to cut down on procedures, thus saving money.

“You have to err on the side of caution, it’s often a life or death situation, it’s Russian roulette and I do not want to play with my patients’ lives, so I do the procedures,” he told the Guardian.

But the government and a federal court have taken a very different view of the situation.

The $7.2m investigators discovered he had pocketed for unwarranted procedures was not an especially large crime in monetary terms. Health care fraud costs American taxpayers $80bn a year, according to an estimate by the FBI.

It was the nature of his crimes that horrified investigators, shattering the “sacred trust” between doctor and patient by scaring patients into undergoing unnecessary treatments that may have put them at more risk than if they had never come under his care, the Guardian was told.

“He was good at manipulating his patients. He would convince them that if they did not have these services that he provided, they could possibly die. We put so much faith in doctors, it shakes everyone up to realize that there is a minority who put greed first,” Justin Shammot, supervisory special agent with the FBI’s Cleveland office, said.

But Persaud declared that he is appealing his recent conviction and the sentence he was handed in court in Cleveland on December 18, of 20 years in federal prison, after a jury found him guilty in October of fraud, falsifying documents and money laundering.

Persaud studied and was trained initially in the United Kingdom, but has been working in the US since 1984. He is an American citizen, but has had to forfeit his passport since his conviction.

He is not in custody as he awaits a date from the federal bureau of prisons to begin his incarceration, and spoke to the Guardian on his cell phone from the home in Westlake, a suburb of Cleveland, that he shares with his American wife.

“I did make some mistakes and I take full responsibility for that, when I dictated my notes, but none of it was fraudulent. I made some billing errors, but I did nothing wrong, medically,” he insisted.

Federal agents spent two years investigating Persaud from 2012 to 2014, when he went on trial, and believe his malpractice involved around 100 patients from 2006 to 2012. He is facing several civil lawsuits from patients who went under his knife.

The Ohio medical authorities are now reviewing his license, with a view to suspending or withdrawing it, investigators said.

Dr Persaud ran his own practice but had privileges at three area hospitals, where he performed procedures himself or sent patients for operations performed by others, many of them unnecessary, so he could reap payments from the government’s Medicare scheme and from private insurers.

Some patients were injected repeatedly with radioactive material for heart tests they did not need, with the doctor lying that the results showed they needed surgery, the FBI said.

Others were given bypass operations or stents for imaginary problems fabricated or exaggerated by the physician, the FBI has said.

“This is the worst kind of healthcare fraud you can have and is the toughest I’ve seen – and I’ve seen some really bad stuff,” Shammot said.

One patient, Anthony Barber, 56, had a stent put in a heart blood vessel by Dr. Persaud in 2012 that he did not need, according to a lawsuit against the doctor which is set to go to trial in November 2016 and is expected to claim in the region of $500,000 damages.

“The allegations are that Harry Persaud negligently provided medical care and lied about the patient’s symptoms to justify the need for cardiac catheterization and, ultimately, stenting,” Michael Shroge, Barber’s attorney, said.

Shroge said that Dr Persaud told Barber that he had a life-threatening condition. Other doctors have now told him it would be more risky for him to have the unnecessary stent removed than to leave it in his body.

“This is the evilest part – I don’t know that he will ever agree that he did anything wrong. They [his lawyers] have denied that he has damaged any of his patients,” said Shroge.

Patients testified at the sentencing about their concerns and one women told the court that Persaud’s practices may have contributed to the death of her husband.

Persaud was born in British Guyana and moved to the UK when he was 10. According to documents submitted as part of the civil case, the details of which Persaud confirmed, he went to Kentwood Boys school in London for his secondary education from 1971 to 1978.

He attended Southampton University School of Medicine, from 1978 to 1983 and then spent six months in training at Glan Clwyd hospital in Rhyl, North Wales, and six months training at Blackburn Infirmary, in Blackburn, Lancashire, before moving to the US in 1984, where his parents had settled.

He spent three years as a resident at Rochester general hospital in upstate New York, then moved to Cleveland, Ohio. He has run his own practice in Westlake for the past 23 years and is now an American citizen.

Persaud must attend a hearing in January that will rule how much restitution he will have to pay insurers.

He told the Guardian he had never been the subject of an investigation or lawsuits previously in his career in the US or the UK. “There is no blemish on my record,” he said. Until now.