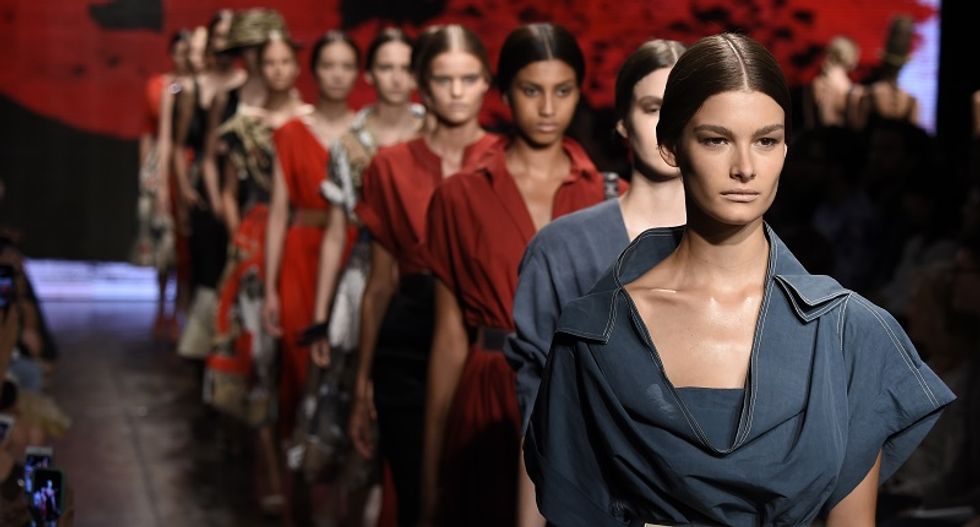 It would be a tough sell to argue that any country is more serious about fashion than France. But the European country from which common phrases like haute couture and designers like Yves Saint Laurent originated is leading on protecting models from an industry notorious for demanding they be dangerously thin.

Following France's move in April barring models from being below a healthy weight, two Harvard experts on eating disorders are urging the United States to follow suit, WBUR reports. A paper released this week by Katherine L. Record and S. Bryn Austin of Harvard's T.H. Chan School of Public Health makes the case that fashion models should be protected from life-threatening workplace hazards to the same extent as other industries.

Israel passed a similar ban in 2013 on overly-thin models.

"The U.S. government regulates the extent to which any other industry can expose employees to harm,” the paper's authors note, according to the L.A. Times. “Professional fashion models are particularly vulnerable to eating disorders resulting from occupational demands to maintain extreme thinness.”

The healthy body mass index -- a ration of weight and height -- for women in the United States is 18.5. But a model walking in an international fashion show typically has a BMI below 16 -- which by international standards is categorized as "extreme thinness," the Times reports. That means a very tall woman of 5'9" would weigh just 108 pounds.

The regulations are needed as a wake-up call to the fashion industry, the Harvard health experts write.

“Paired with similar restrictions in France, OSHA regulations in the United States would shake the fashion industry,” Record and Austin say. “Designers would be hard pressed to maintain a presence in the fashion industry without participating in the New York City and Paris Fashion Weeks.”

They argue the Occupational Safety and Health Administration should enforce the rule. In France, lawmakers have proposed prison time and hefty fines for agents who violate bans on models who fall below the cut off, which for example requires women who are 5'9" to weigh about 120 pounds.

"Certainly, the government takes very seriously workplace hazards in factories in farm work, in a number of other settings where the government has set limits on what employers can do to workers, what they can expose workers to, but they have not stepped in with the fashion industry, and they need to," Austin told WBUR.

The researchers pointed out that many models begin working while they are still children, making them particularly vulnerable to the pressures of the industry.

"Certainly, we are first and foremost concerned about the health and safety of models working in the industry, because they are grossly abused and exploited and we have to say no. We have to stop this. Many of them are children," Austin said.

Austin also pointed out that the fashion industry has a ripple effect on the general population, with the unhealthy result being unrealistic expectations about weight are placed on people.

"[W]e also know the fashion industry projects out to the world the most unrealistic standards of female beauty — and more and more, we’re seeing unrealistic standards of male beauty, through the ways they force models to distort their bodies to get jobs," Austin told WBUR. "Then they project these images — sometimes with an overlay of Photoshopping, digital manipulation — that are fed to all of us."

One high-profile horror story involves the death of Brazilian model Ana Carolina Reston. Reston had long dreamed of being a fashion model, but when her dream came true it took her life. The 21 year old died from complications of anorexia, weighing only 88 pounds at 5'8" after being told she was "too fat" for the industry.

"[T]he fashion industry for too long has been allowed to create a toxic work environment for professional models and then a toxic social environment, a toxic media environment for all the rest of us, especially for the millions of young people growing up in this country," Austin told WBUR. "Every day, they’re bombarded by these images that are dangerous."