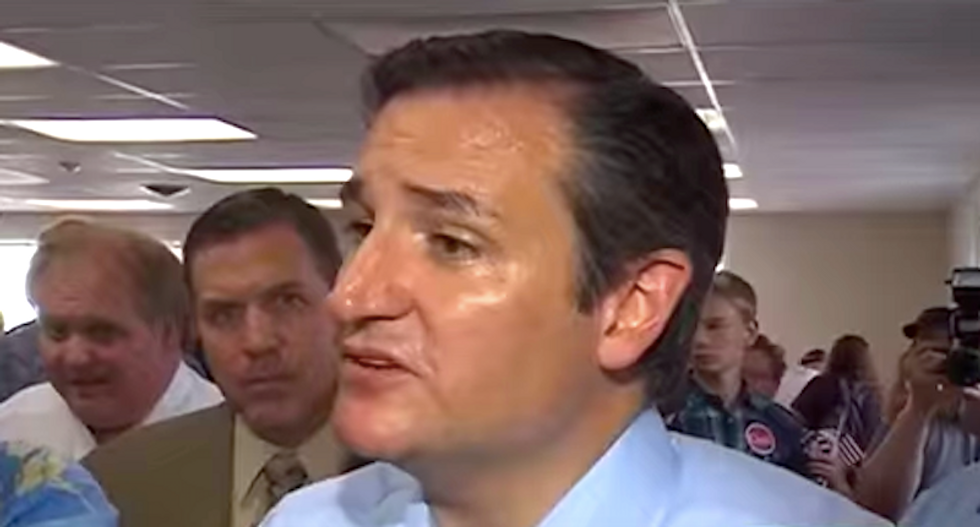 As the San Bernardino shooting was unfolding, Democratic politicians were tweeting about the dire need for gun control to help stop what has become a regular occurrence in this country. Hillary Clinton tweeted, “I refuse to accept this as normal. We must take action to stop gun violence now.” Rival Bernie Sanders wrote that, “Mass shootings are becoming an almost everyday occurrence in this country. This sickening and senseless gun violence must stop.” And Martin O’Malley suggested that it was high time for pushback against the NRA, tweeting, “Horrifying news out of #SanBernardino. Enough is enough: it’s time to stand up to the @NRA and enact meaningful gun safety laws.”

Even Geraldo Rivera, no liberal, got on social media to call for reform. “The 2d Amendment is Stupid!!! Don't rationalize,” he stated in one tweet. In another, he wrote simply, “The NRA is full of shit.”

Meanwhile Republicans continued their policy of doing and saying absolutely nothing. For the most part, they urged prayer—always an unsure bet—instead of the more effective option of actual gun law reform. (Here kudos must be given to Democratic Senator Christopher Murphy, who in one of the most cited tweets of the day, offered this blanket response: “Your ‘thoughts’ should be about steps to take to stop this carnage. Your ‘prayers’ should be for forgiveness if you do nothing — again.”)

Here’s a look at some of the worst responses to the mass shooting in San Bernardino.

California shooting looks very bad. Good luck to law enforcement and God bless. This is when our police are so appreciated! — Donald J. Trump (@realDonaldTrump) Dec. 2, 2015

Trump tweeted insincere praise of law enforcement, not because he really cares about cops, but as a transparent show of his opposition to those decrying police violence. Let me be absolutely clear and say the police and other first responders deserve nothing but applause in this situation. But Trump couldn’t even deliver that without also implying that police violence is always isolated, so everybody should shut up about it, already.

"This is when we appreciate our great police and our law enforcement. Remember that. Remember that," the billionaire told an audience in Manassas, Virginia. "They don't get enough credit, they should get it and you're always going to have some bad apples, you see it on television."

If you ever doubt his gross opportunism and absolute lack of shame, note that later that night, he retweeted a message stating that “his poll numbers jump every time instances like this occur.”

Trump: The only candidate who boasts about how national tragedies help his numbers.

My thoughts and prayers are with the shooting victims and their families in San Bernardino. — Ben Carson (@RealBenCarson) Dec. 2, 2015

In typical GOP fashion, Carson tweeted about “thoughts and prayers” in the aftermath of the shooting. Later, in an interview with ABC News, he called the shooting a “hate crime” (which is not how that phrase is applied), and lumped it in with several other instances of global violence:

“Look at what happened again. Another hate crime in San Bernardino today. That these 14 people killed. Less than a week ago, we had the shooting in Colorado and then look at all the things going on around the world—ISIS and groups like this. Just hate and evil. We need to be able to combat these things or else we will melt into despair and that’s not who we are."

There’s so much disingenuous drivel here, but perhaps the most offensive is Carson’s feigned cluelessness about how we might “combat these things,” as if we couldn’t start with gun control were it not for the constant obstructionism from his own party. By lumping San Bernardino in with ISIS attacks, Carson pretends that domestic terrorism is as complex a conundrum as creating world peace, instead of just a matter of amending our free-for-all gun legislation. Because that would require him to admit that doing absolutely nothing about guns is stupid and the Republican Party is full of cowards with more and more blood on their hands with each passing day.

Our prayers are with the victims, their families, and the first responders in San Bernardino who willingly go into harm’s way to save others. — Ted Cruz (@tedcruz) Dec. 2, 2015

Predictably, Cruz tweeted prayers in a message that, as the Daily News points out, used almost the exact same wording as the one he sent last week after the terrorist attack on Planned Parenthood. Speaking before the Republican Jewish Coalition this morning, Cruz opted for Islamophobic scaremongering, beating the drums of war and blaming the president.

“[A]ll of us are deeply concerned that this is yet another manifestation of terrorism, radical Islamic terrorism here at home," said Cruz, according to ABC News.

“Yesterday’s horrific murder in the wake of Paris underscores we’re at a time of war whether or not the current administration realizes it,” Cruz added. “Our enemies are at war with us, and I believe this nation needs a wartime president to defend it...When the president stands up and says the Islamic State isn’t Islamic, that’s just nutty.”

Praying for the victims, their families & the San Bernardino first responders in the wake of this tragic shooting. — Jeb Bush (@JebBush) Dec. 2, 2015

The third contender for the presidency in the Bush dynasty tweeted yet more prayers, a way of saying he has no intention of upsetting his base.

Praying for all those victimized by the shootings in San Bernardino, California today. — Gov. Christie (@GovChristie) Dec. 2, 2015

Ditto. Consider GOP prayers—and there are many to follow—a refusal to put lives above votes.

My thoughts and prayers are with the victims, families, and brave first responders during this unspeakable tragedy. — Rand Paul (@RandPaul) Dec. 2, 2015

Praying for those impacted by the shooting in California today. — Gov. Mike Huckabee (@GovMikeHuckabee) Dec. 2, 2015

A legal analyst for Fox, Johnson probably couldn’t wait for the chance to declare this a war on Christmas. Appearing on Fox and Friends, the attorney did his part to help push the network’s “persecuted Christian” narrative.

“There are cardinal characteristics, cardinal fingerprints of terrorism. Is this a typical workplace violence attack or is this a Jihadi Jane and Joe?...Is it based on politics? Is it based on religion? Is it based on hate? Is it a literal war on Christmas?”

People keep blaming the NRA for mass shootings, but they weren't so common until after Obama told people to take guns to knife fights. — Erick Erickson (@EWErickson) Dec. 2, 2015

Redstate.com’s editorial head pulled a “Thanks, Obama!” He was also angry that people are blaming the NRA for this just because it’s definitely partially its fault.

Instead of speaking to the tragedy itself, the reporter for the Daily Caller, Tucker Carlson’s site, made it about how climate change isn’t real. Despite the fact that these issues are wholly unrelated, I haven’t yet heard anyone accuse her of politicizing the moment.

A likely ecstatic Ann Coulter pondered the most outlandish thing she could say and then put it in one of her columns. (tl; dr: White men are good; Mexicans, Muslims, non-whites, not so much.)

“After 20 years of nearly non-stop mass murder by non-white immigrants in a country that is still majority white our media have the audacity to claim that tens of thousands of Syrian Muslims are less dangerous than the most pacific human beings in world history: 21st-century white American men.”

Hasselbeck accused politicians who are urging real action, instead of just prayers, of being anti-Christian terrorist sympathizers. (I’m being concise.)

When you see tweets like Chris Murphy out of Connecticut saying "Your 'thoughts' should be about steps to take to stop to take this carnage. Your prayers should be for forgiveness if you do nothing again." And then a tweet from the editor of ThinkProgress, Zack Ford, saying, "Try this: Stop thinking. Stop praying. Look up Einstein's definition of insanity. Stop (sic) acting on gun violence prevention measures."

[....]I say this, if you want to line up with terrorists and try to take God away, you're not on the right side. That's all I'd have to say to those politicians who want to tell you to stop praying. Just don't.

Feminism did it, according to the forensic psychologist, called in as an expert by Fox News, you won't be surprised to learn. Reports that alleged shooter Tashfeen Malik left her 6-month-old daughter with the baby's grandmother prompted Welner to wonder aloud if feminism had contributed to the shooting and made Malik a negligent mom.

“How far would you go for your Islam?” Welner asked. “Would you kill for it? Would you die for it? And in this example that we have, would you leave a newborn baby behind?”

“When you see a woman involved, the natural questions that we have to ask are, what is the state of feminism in Muslim America? How are women’s rights defined? As you say, who radicalized whom?”

After learning one of the suspect’s names was Syed Farook—an “Islamic name” as one guest on O’Reilly’s show was sure to note—the Fox fear machine was off and running.

On their respective shows, O’Reilly and Kelly and their invited guests seemed all too eager to talk about Muslims and terror and why we should all be scared.

“[W]e studied 100 mosques in the United States chosen at random, and 80 of them were either preaching jihad or had jihadist literature available,” said Jim Hansen, who serves as a counter-terrorism expert on the network. “Those things are not compatible with our society, they are preaching violence.”