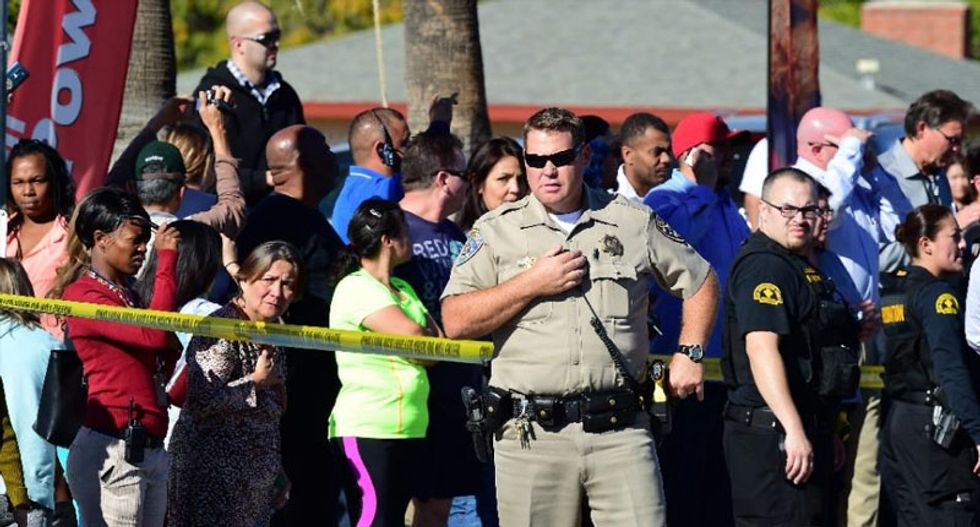 A crowd gathers behind police lines near the scene of a shooting on December 2, 2015 in San Bernardino, California (AFP Photo/Frederic J. Brown)

The shooting continued long enough for a TV cameraman to drive to the scene in time to hear the final rounds.

Alex Vasquez of the NBC4 channel pulled up outside a county building in San Bernardino at about 11am. “People were running,” Vasquez said later. “People had been shot in the back, arms, chest. I saw a woman who was badly injured. She was on the ground, struggling. I saw her take her last breath. These were people who got up in the morning and went to work and ended up in their worst nightmare.”

Many in in the US argue the nightmare of mass shootings is becoming eerily familiar, including the president, Barack Obama, who recently lamented that massacres had become “routine”. Yet it quickly became clear that this particular mass shooting, which took place at an office Christmas party for employees of San Bernardino County health department , was exceptional even by US standards.

For a start, the number of victims – at least 14 killed and 21 wounded – made this the deadliest shooting on US soil since the Sandy Hook school massacre in 2012. Police and FBI officials immediately stressed the meticulous planning and preparation that appeared to have gone into the attack to maximise the number of deaths – with some suggestion the assailants intended further attacks.

More unusually still, this was not, like recent shooting sprees in Colorado, Oregon and South Carolina, an atrocity perpetrated by a lone gunman. Instead, police confirmed at a late night press conference that the assailants were a married couple who had recently become parents.

Syed Rizwan Farook, 28, was a county environmental health inspector born in Illinois, a colleague of the people at the party. Tashfeen Malik, 27, was his wife – and the mother to the their six-month-old child.

By Thursday, further details released by police painted an even more alarming picture of the atrocity, including the fact that the assailants arrived at the scene with a homemade pipe bomb strapped to a remote-controlled car. Inside the garage at the couple’s rented home, five miles away, police found ammunition, weapons, 12 more pipe bombs, and the tools and machinery required to construct more improvised explosive devices. Their guns were legally purchased.

Twenty-four hours after the massacre, San Bernardino police chief Jarrod Burguan gave the first details of the attack. He said the motive was still unclear but did not rule out terrorism.

The party was being hosted by the county public health department at San Bernardino’s Inland Regional Center, a state-funded not-for-profit organisation. Farook, a US citizen who had worked at the center for five years, appears to have attended the gathering like other employees.

After some kind of dispute, Farook may have become angry, according to police, and left. He returned 10 to 30 minutes later with Malik; dressed in black “assault-style” clothing and armed with assault rifles and semi-automatic handguns, they opened fire.

“Nobody gets upset at party and puts together that kind of elaborate scheme or planning to do that,” Burguan said on Thursday. “They sprayed the room with bullets so I don’t know if there was any one person they targeted.”

Relatives of victims later described the horror that unfolded inside. Denise Peraza, 27, who was shot at the party, told her sister, Kathy Hotetz, of the ordeal in telephone conversation from her hospital bed. Hotetz told the LA Times that her sister described two men dressed in black entering the room with large guns before starting to shoot. “Everyone dropped to the floor,” Peraza reportedly said. “The guys opened fire for 30 seconds, randomly, then paused to reload and began firing again.”

The couple also appear to have tried and failed to detonate three pipe bombs that were strapped together and attached to a remote controlled car. The detonation failed, police said later, and the device was later destroyed by police.

When the killing spree was over, Farook and Malik fled, driving out of the parking lot in a black SUV. For several hours police appeared unsure of the identities of the suspects, with some witnesses saying there had been three. “These were people that came prepared to do what they did, as if they were on a mission,” Burguan told reporters about 2pm on Wednesday, as his officers fanned out across the city in a desperate hunt for the assailants.

What Burguan had not told the media was that police were already acting on a tip, and within the hour would descend on a property rented by Farook and Malik in the nearby city of Redlands, about five miles (8km) away from the Inland Regional Center. For the second time that day, Farook and Malik escaped in their black SUV. They were heading back into San Bernadino, and toward the building complex where they killed more than a dozen people hours earlier, armed with more weapons and 1,600 rounds of ammunition.

For a few tense minutes, the couple’s vehicle, a rented Ford Expedition, sped through San Bernadino’s palm-tree lined streets, with police in pursuit – and live TV helicopters hovering overhead. The suspects’ vehicle was stopped in a hail of gunfire less than two miles from the Inland Regional Center.

It is unclear who fired first. According to police, Malik used a rifle to fire at police out of the back window of the SUV. The vehicle stopped, Farook emerged, and he too fired at police. The couple discharged 76 rounds, injuring one police officer, who was shot in the leg and was due to be released from hospital on Thursday.

They were met with a barrage of fire from police. Twenty-three officers shot back at the SUV, discharging in total 381 rounds. Burguan would later describe the actions of his officers as “flat-out heroic”.

When TV cameras zoomed in to capture the aftermath, they showed a bullet-riddled SUV with shot-out windows wedged between two armoured police vehicles. Farook was lying on the road, beside a pool of blood. Malik was still inside the SUV.

Burguan and other police and FBI officials said they were trying to piece together how the attack had unfolded – and why.

Pressed over the nature of the attack on Wednesday night, the FBI’s assistant director in Los Angeles, David Bowdich, declined to use the term terrorism. “I am still not willing to say if we know that for sure,” he said. “It is a possibility but we don’t know that yet and we’re not willing to go down that road yet.”

By Thursday morning, Bowdich continued to hold that line, in spite of evidence that the attack clearly had been planned. Both husband and wife appear to have connections to Pakistan. Farook recently traveled to Pakistan, authorities said, although it is unclear when that trip occurred. It may have been related to his wife, who had a K1 visa in her Pakistani passport.

Burguanseemed dismissive of the suggestion that Farook had merely acted out of rage after arguing with co-workers at the Christmas party. “Based upon what we have seen, based on how they were equipped, there had to have been some degree of planning that went into this,” he said. “So I don’t think they just ran home, put on these types of tactical clothes and then came back in a spur of the moment thing.”

Neither did Farook’s brother-in-law, Farhan Khan , who spoke briefly to reporters late on Wednesday night. He looked dazed when he appeared before TV cameras at a press conference held by the LA division of the Council on American–Islamic Relations. He said only a few words. “Why would he do that? Why would he do something like this? I have absolutely no idea, I am in shock myself.”