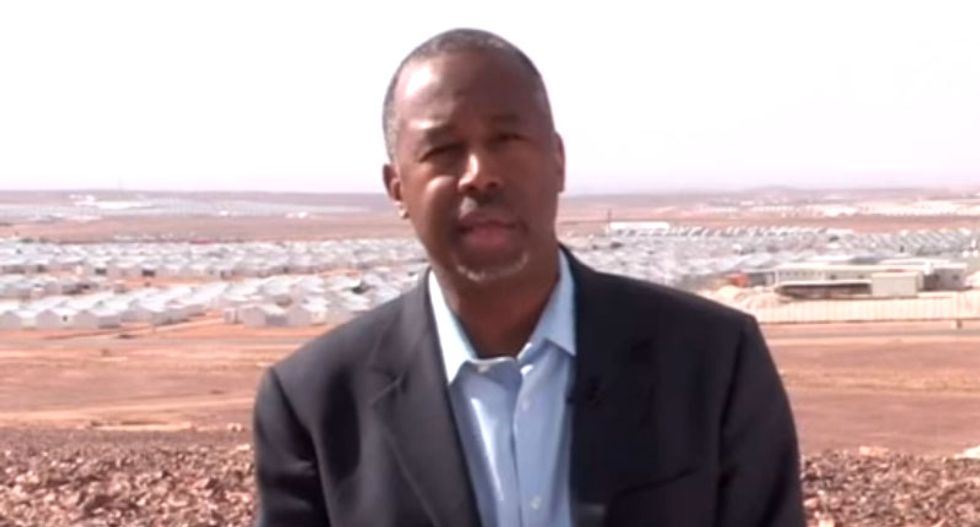 Republican presidential candidate Ben Carson's comments after a visit to a Syrian refugee camp in Jordan underestimated the scope and complexity of a global crisis, aid and refugee groups said Monday.

Carson, a leading candidate in the race for the 2016 Republican presidential nomination, visited the Zaatari camp for refugees fleeing Syria's civil war over the weekend.

In television interviews on Sunday, Carson, who has faced scrutiny over his foreign policy credentials, said he found facilities there to be "really quite nice" and that people there would rather stay or return home to Syria than go to the United States.

Shannon Scribner, humanitarian policy manager for Oxfam America, praised Carson for visiting the camp, which holds around 84,000 refugees, and for bringing attention to the need for more funding.

"What I didn't hear him talking about, though, was that a political solution is what's needed," she said. "In order to stop this flow of refugees the fighting actually needs to stop."

He also failed to consider resettling the refugees as part of the solution, she said. Most of them hope to return to Syria one day, but some are unable to, and nobody wants to stay in the camps, she noted.

Carson told CNN that many of the Syrian refugees want to return to Syria. "But they are satisfied to be in the refugee camps if the refugee camps are adequately funded. Recognize that in these camps they have schools, they have recreational facilities that are really quite nice," Carson said.

"They're not nice," said Melanie Nezer, a policy director at HIAS, a Jewish nonprofit agency that works with refugees worldwide.

Zaatari, one of two big camps in Jordan, is at capacity and the other, Azraq, has no electricity and poses security concerns, especially for women, according to HIAS. They are living in the desert, cannot work and many long to return to lives that were once middle class, the aid workers said.

"No one wants to be a refugee," Scribner said.

Carson and other Republican candidates have criticized President Barack Obama's plan to admit 10,000 Syrian refugees over the coming year. They cite the risk of militants slipping through, especially after the Nov. 13 attacks in Paris by Islamic State.

Carson also called for increased U.S. aid for regional refugee efforts. "If you do that, you solve that problem without exposing the American people to a population that could be infiltrated with terrorists who want to destroy us," he said.

The vast majority of the 4 million refugees who have fled Syria since the civil war began in 2011 do not live in refugee camps, but are spread among the population in the host country. In Jordan, only about 20 percent of the more than 620,000 registered Syrians live in the camps, the refugee groups said.

"So to suggest that the solution for Syrian refugees in Jordan is to simply funnel more money into refugee camps in Jordan is erroneous," said Naomi Steinberg, director of Refugee Council USA.

She declined to comment specifically on Carson's trip, but said, "To visit Jordan and to visit the camps and to think that that is the full picture is inaccurate."

Neighboring countries Turkey, Lebanon and Jordan have taken in large numbers of refugees. Nezer noted that one in four people in Lebanon is a Syrian refugee.

"They can't absorb all these people and they really need help from the rest of the world. We can't just say to these countries that the burden is completely on them," she said.

Carson offered few details about how he would work to defeat Islamic State militants and stabilize Syria to enable the refugees' return.

His comments reflected a rudimentary understanding of the scope of the Syrian refugee crisis, Nezer said.

"I could watch brain surgery for a day or two; that doesn't make me a brain surgeon," she said. "You cannot get an appreciation for the scale of this crisis and the global implications of it by spending a day or two talking to a few refugees in one location."