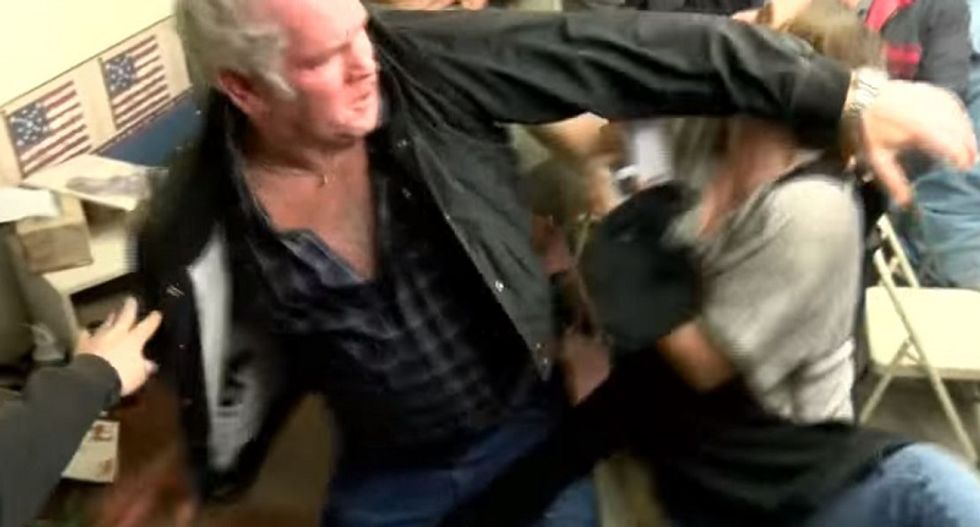 Hymera, Indiana residents get into brawl at town board meeting (WTHI/Screenshot)

A town hall meeting in tiny Hymera, Indiana -- population 790 -- turned into a violent brawl amid a dispute over replacing the town marshal, IndyStar reports.

The town's board voted to replace Darrick Cullison, who is suing them and claiming he was wrongly fired. Tuesday night, the board brought plans to replace him with Daryl McCullough, WTHI reports. It didn't take long for an exchange of words to lead to a physical fight.

“I think it got a little out of hand,” Hymera resident Roger Thompson told WTHI. “I just tried to ask a simple question as to why we terminated the town marshal in October.”

Cullison's firing has been hotly disputed. The reason given for the termination, according to WTHI, was "paid hours unworked." But Cullison seems to be a popular and well-known figure around town.

“The man has never done nothing but help the town of Hymera. There’s been two occasions where if it wouldn’t have been for him my dad wouldn’t be alive today,” resident Steven Allen told the station.

“I was robbed last year about this time and he had the culprits in jail within 72 hours,” local business owner Ray Bedwell told WTHI.

Residents complained the board was being secretive with its handling of he matter.

“They wouldn’t talk to us about it even though we pay their salaries. We’re the people that he’s out here protecting,” Nancy Miller complained to the station.

Video of the fight, as posted by WTHI, can be seen here: