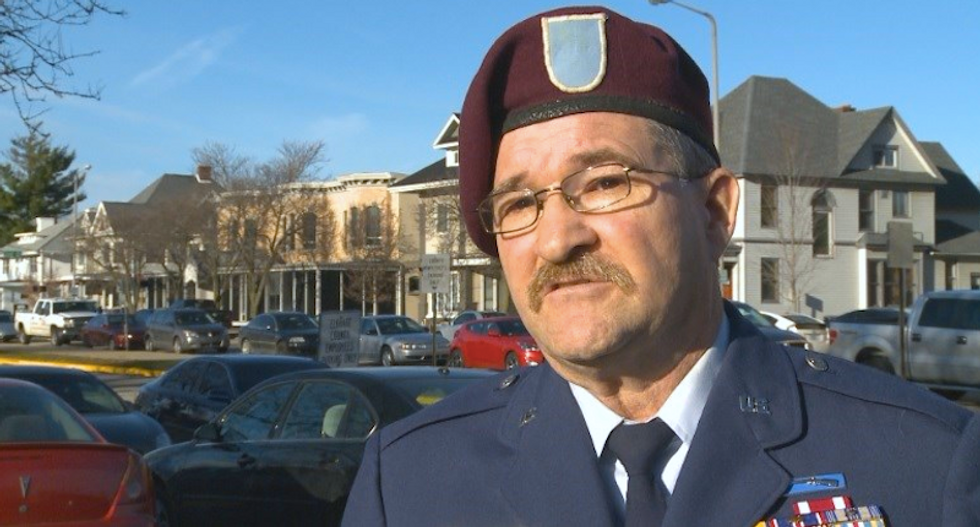 An Indiana veteran is baffled that he was arrested on felony charges after opening fire at two shoplifting suspects fleeing a store near his home.

“I thought, ‘Really? A felony charge?’ I’m very well-trained,” said Norman Reynolds, who chased the men out of the Big R store in Elkhart and fired his gun at them when he was unable to catch up, reported WBND-LD.

The 60-year-old faces up to five years in prison and a possible $10,000 fine if he's convicted of criminal recklessness with a deadly weapon and pointing a firearm.

Police were already chasing the men out of the store during the October incident when Reynolds joined the pursuit, and they said he drew his handgun and fired one shot at the suspects after they got into a pickup truck.

The bullet struck the outside of the truck's passenger compartment, and the suspects escaped.

Reynolds, who served 24 years in the U.S. Army and Air Force and holds a concealed carry permit, said he was acting on instinct when he fired his weapon to keep the suspects from getting away.

He claimed the man in the passenger seat momentarily vanished from view, and he feared the suspect would reappear with a weapon.

“I wanted them to stay there until the police arrived,” Reynolds said. “I figured if he had a weapon, he wasn’t going to use it then.”

Reynolds told the TV station that he has been handling weapons for 45 years and only intended to shoot the truck -- and not the suspects.

He has stopped carrying a firearm after he was charged, and Reynolds said he no longer feels comfortable leaving the house.

“I really, really feel uncomfortable, so we hardly ever go out,” Reynolds said. “I pretty much stay in my house because I don’t feel like I can defend myself -- and I will not be a victim."

A Michigan woman pleaded no contest to opening fire on two shoplifting suspects fleeing a Home Depot store, and she complained at her sentencing last week that she was only trying to help.

"I learned my lesson -- that I will never help anybody again,” said Tatiana Duva-Rodriguez, who received 18 months on probation and lost her concealed carry permit until 2023.

Reynolds, for his part, said he was only trying to be helpful.

"If I knew I was going to be prosecuted, I don't know if I would have done this or not," he said.

Police said shortly after the shooting that they appreciated Reynolds' intention to help, but they said civilians should focus on memorizing the suspects' appearance or license plate number instead of putting themselves or others in harm's way.

“That weapon is there to protect yourself or others,” said Sgt. Chris Snyder, a spokesman for Elkhart police. “And somebody that’s running away from you, getting in a car to even go further away from you -- does that really pose a risk to you or to anybody else?”