Jeb Bush: It's 'liberating' to run against a guy like Trump 'who is not qualified to be president' 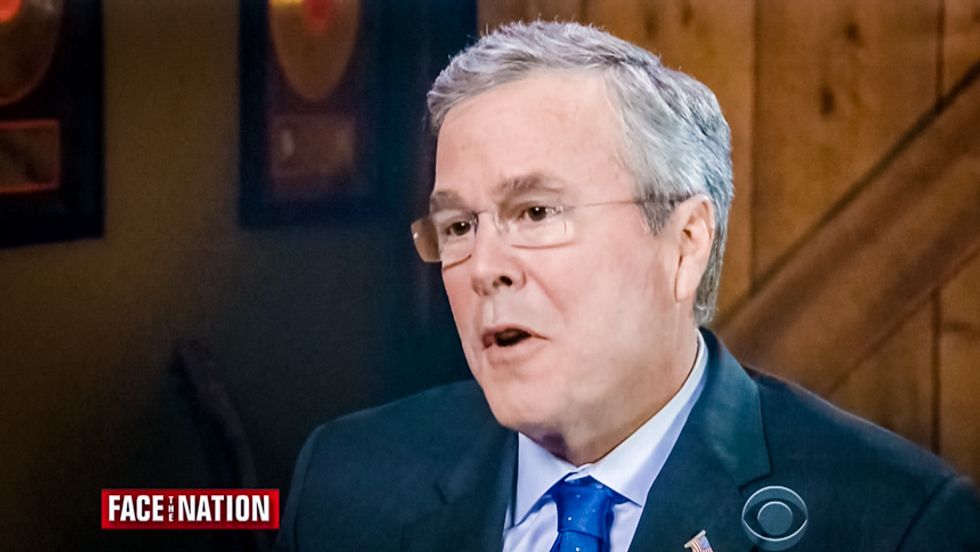 Jeb Bush says it is “a little liberating” to be campaigning against Donald Trump, who is 30% or more ahead of the former Florida governor in recent opinion polls .

Related: Bush seeks to insult his way to the presidency, calling Trump a 'jerk'

Bush spoke in an interview with CBS’s Face the Nation scheduled for broadcast on Sunday and taped in New Hampshire on the same day he told a town hall audience Trump was a “jerk” .

Given that remark came with a repetition of Bush’s assertion from this week’s Republican debate in Las Vegas that Trump cannot “insult his way to the presidency”, reaction was widespread and amused.

On Friday, through Twitter, Trump called Bush “dumb as a rock”. He returned to the offensive on Sunday morning .

“To a certain extent, it is a little liberating to be able to post up against a guy who is not qualified to be president,” Bush said in the CBS interview, which was excerpted by the website Politico.

“I’m trying to point out that he’s not a serious candidate. His [debate] answer about the nuclear triad , for example, was mindblowing ... I mean, he has no knowledge about this stuff.

“[H]e now has come out saying Putin is a strong man and a great guy, when he’s trying to destabilize our relationship with our allies. He’s not a serious candidate.”

Trump’s praise of Russian president Vladimir Putin – and Putin’s praise of Trump – have led other candidates to attack the billionaire .

Also speaking to CBS in an interview taped on Saturday for broadcast on Sunday and excerpted by Politico, Florida senator Marco Rubio – now running third in most polls – said: “Donald Trump seemed to be honored by the praise from Putin.”

“He shouldn’t be. Vladimir Putin is a person who has killed. He’s jailed and murdered journalists, political opponents. He bombed an apartment building as a pretext to attack the Chechens. He is responsible for the downing of the Malaysian airliner over Ukraine, because he provided the anti-aircraft weaponry that was used for that. So this is a person who’s done some horrifying things on the global stage.”

On Friday, on NBC, Trump was asked what he thought of Putin as someone who “kills journalists, political opponents and invades countries”. Trump said: “At least he’s a leader unlike what we have in this country.”

“Our country does plenty of killing also,” he added.

Speaking in Iowa on Saturday, Trump said: “If Putin likes me, actually he thinks I’m a good, smart person, which I hope he believes that I am … actually he’s right, I am brilliant.”

On CBS, Rubio said: “We’ve entered a portion of this politics where nothing surprises me anymore, whether it’s from Donald or some of the people watching.”

Bush, meanwhile, also said that not being the frontrunner in Republican polls made him feel “much better”.

“Yeah, I hated that,” he said, of his early lead in the polls, now a distant memory. “I feel much better back here … I’ve always thought that there was going to be a high expectation for me.

“I have to go earn it. I have higher expectations on me … So it doesn’t bother me a bit that the expectations are high. And I want to win, which means that you garner momentum when it matters. And so I feel good about where we are right now.”