Larry Wilmore on ‘asshole’ Donald Trump: ‘If Cheney’s against you — you’re really out there’ 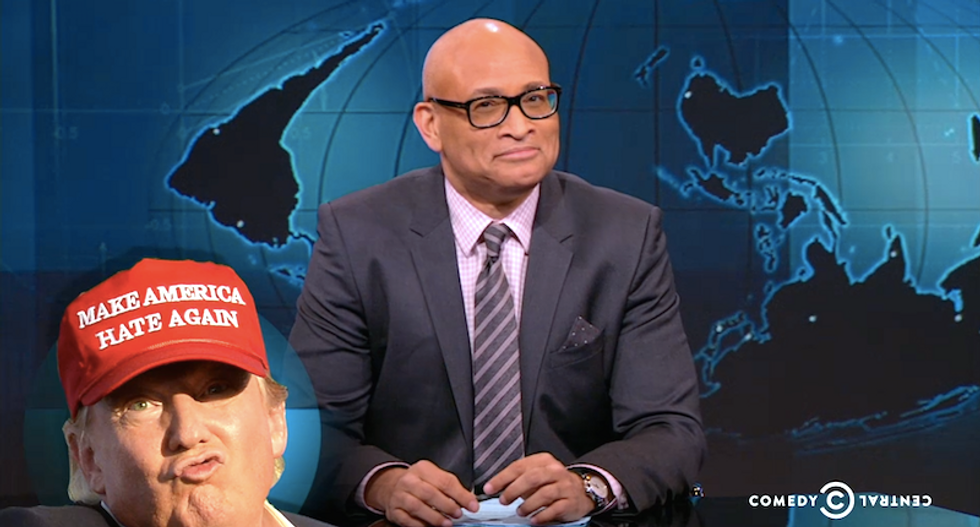 Larry Wilmore isn't sure what's more horrifying -- Donald Trump's outrageous proposal to ban Muslim from the U.S., or the enthusiastic cheers that greeted his suggestion.

"You know what? I'm going with the cheering," Wilmore decided on a moment's reflection. "But because I'm doing a comedy show, Larry J. Wilmore is going to discuss what Donald J. Asshole just said."

The "Nightly Show" host wondered how such a policy would even be implemented, and he rolled video of the Republican frontrunner telling a cable news anchor that customs agents would simply ask immigrants if they were Muslim -- and they would be barred if they answered yes.

"This is actually a foolproof plan, you guys," Wilmore said, stifling a guffaw. "Everyone know that ISIS' one weakness is they can't tell a lie. They're into beheadings, mass killings, rape -- but the one thing they won't do is fib."

Wilmore said Trump's suggestion was met with widespread opposition, including from GOP rivals such as Carly Fiorina, Jeb Bush and Lindsay Graham -- who told him to "go to hell."

"Damn, Lindsay Graham," Wilmore said. "When Graham tells you to go to hell, he means literal Hell -- because he believes Hell is an actual place, like Toronto or Philadelphia."

Wilmore said criticism from Trump's opponents should be expected, but he was surprised that Dick Cheney spoke out strongly against the proposal as un-American.

"Wow," Wilmore said. "Former human being and current Frankenstein's monster's attempt at a Frankenstein's monster Dick Cheney must have put in his reasonable heart today, you guys. Because that's the only explanation for why he would criticize Trump and take a break from his busy schedule of strategizing with Pol Pot's ghost and stealing children's dreams. I mean, if Cheney's against you -- you're really out there."