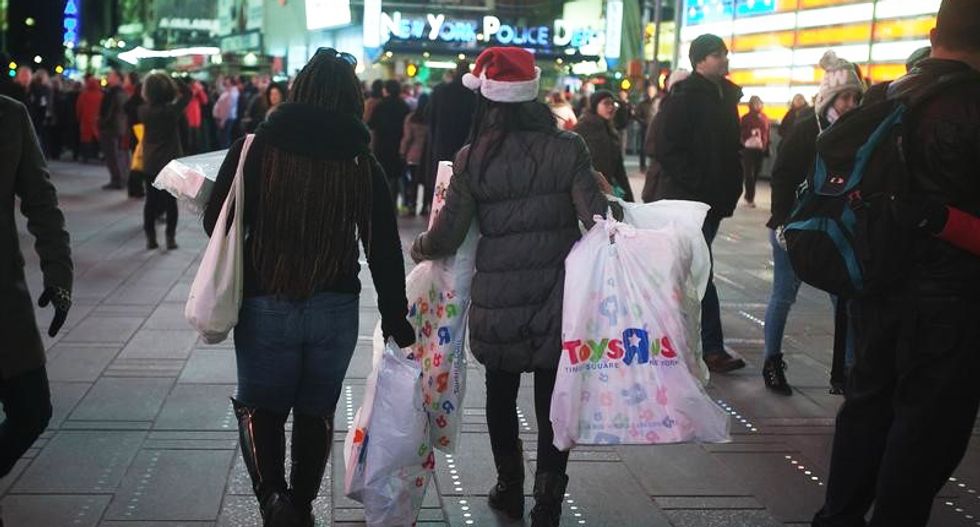 Women make their way though Times Square with bags of purchases from Toys R Us in New York November 27, 2014. REUTERS/Carlo Allegri

Despite early retailer promotions meant to entice shoppers, 17 percent of Americans had not started holiday shopping about a week before Christmas, one percentage point less than last year, according to a recent Reuters/Ipsos poll.

Less than a third had completely finished their shopping, according to the poll, conducted Dec. 14-18.

The pace of sales is crucial to retailers who receive a substantial portion of business during November and December. This year retailers rolled out discounts earlier than ever to boost shopping, but Reuters found that shopping patterns at this stage were nearly the same as last year.

The poll found that 55 percent of American shoppers are cautious about spending due to economic uncertainty, a 17 percentage point increase from a Reuters survey in November but similar to the response in a survey taken at the same time last year.

Some 45 percent had not finished shopping this year because they expected stores to offer better prices just before the holidays, the poll showed, and 43 percent believed online shopping would let them purchase everything they need at the last minute. Close to half of those surveyed said that quick delivery allows them to shop later.

About half of Americans have been too busy to shop, the poll found. Indecision was the next most cited reason for unfinished shoppers.

So-called Super Saturday, the last Saturday before Christmas, is expected to bring in the highest sales for brick and mortar retailers behind Black Friday, which falls the day after Thanksgiving in late November, according to ShopperTrak. Last year sales on Super Saturday topped those on Black Friday.

The poll also signaled that shoppers want more free shipping. About 31 percent will only make purchases if shipping is free, 2 percentage points higher than last year, and more shoppers plan to use in-store and locker pickups for online purchases.

Some 32 percent of Americans believe it is important for retailers to offer same-day shipping, an 8 percentage point increase from November, according to the poll.

The Reuters/Ipsos poll surveyed 1,639 adults with a credibility interval of plus or minus 2.8 percentage points.