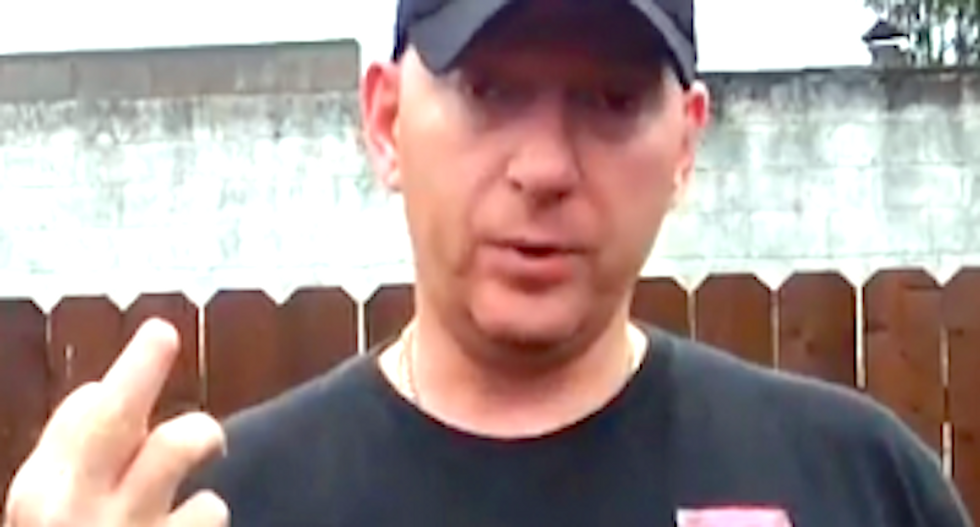 A former Pennsylvania police chief infamous for his profane video rants -- punctuated by gunfire -- against "libtards" has been arrested on harassment and terrorist threat charges.

Mark Kessler was charged last week on one misdemeanor count of harassment in connection with an Aug. 19 confrontation with a Frackville borough councilman at a supermarket checkout, reported the Standard Speaker.

Kessler accused the other man, William Creasy, of talking about his daughter, and he said the former Gilberton police chief shoved him in the chest and wagged a finger in his face, police said.

“You better watch your back, I know where you live,” Kessler allegedly told the man.

Creasy said the former officer also pestered him with slanderous emails, and he worried that Kessler might harm him or his family.

Prosecutors charged Kessler with misdemeanor counts of terroristic threats, harassment and disorderly conduct in connection with an Aug. 22 confrontation outside a drug store.

Shannon Heiber said Kessler pulled alongside her and began screaming obscenities after she passed his Hummer and pulled into the drug store parking lot.

“What are you doing? You’re lucky my kids are in here or you know what would happen,” Kessler allegedly told the woman.

She said Kessler started to pull away at that point but stopped suddenly, backed up and showed her a firearm he had stashed under his seat.

Heiber said she was still afraid Kessler would harm her because he had acted so violent and angry while his children were riding in his vehicle.

Kessler was fired as police chief by city officials in Gilberton after his video rants went viral.

He later claimed he had produced the videos with a federal government agency to draw out sovereign citizens and other “lone wolves” willing to commit violent acts.