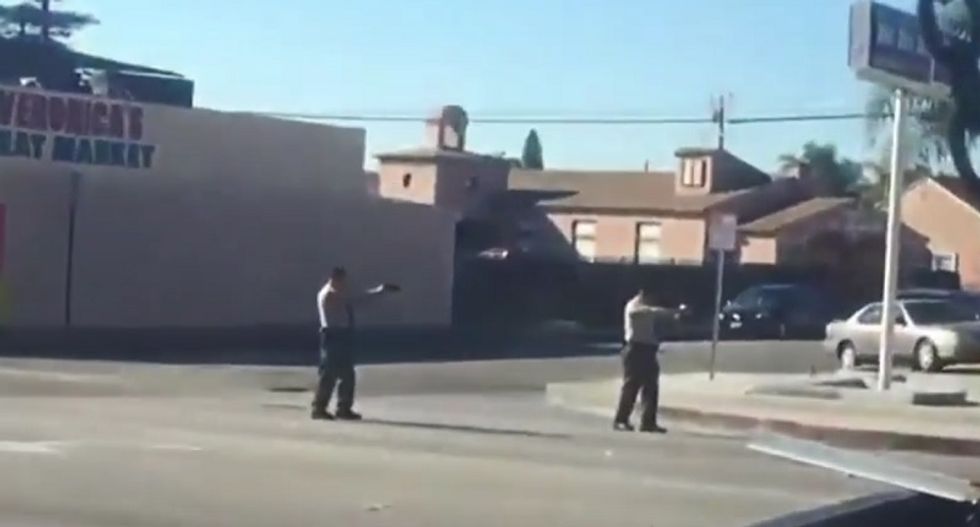 A cell phone video from a bystander captured the shooting, and the man appears to be walking away from deputies when they open fire. It appears he is struck in the back by their bullets and falls to the ground, as they continue to fire. Multiple gunshots can be heard.

The shooting happened at about 11:10 a.m. at the intersection of Long Beach Boulevard and Magnolia Avenue, KTLA reports. Protesters are gathering in the area.

Deputies were called to the area on reports of an armed man wearing a checkered shirt walking at a nearby intersection. L.A. County Sheriff's Homicide Lt. Eddie Hernandez said there were reports the man was actively shooting.

"We have witnesses that say that the suspect turned, pointed the gun at the deputies, and a deputy-involved shooting occurred," he told reporters.

Hernandez said the man had a .45 caliber handgun and that two bullets were found matching the weapon. KABC reports the man was suspected of firing the weapon into the air.

The man was pronounced dead at the scene. No deputies were injured. In the graphic video, the deputies continue firing, even as the man is down on the ground.

The video is graphic. ABC7 blurred out the image of the man writhing as deputies continue to fire on him.