643,000 students at home as Los Angeles closes down schools after receiving threat 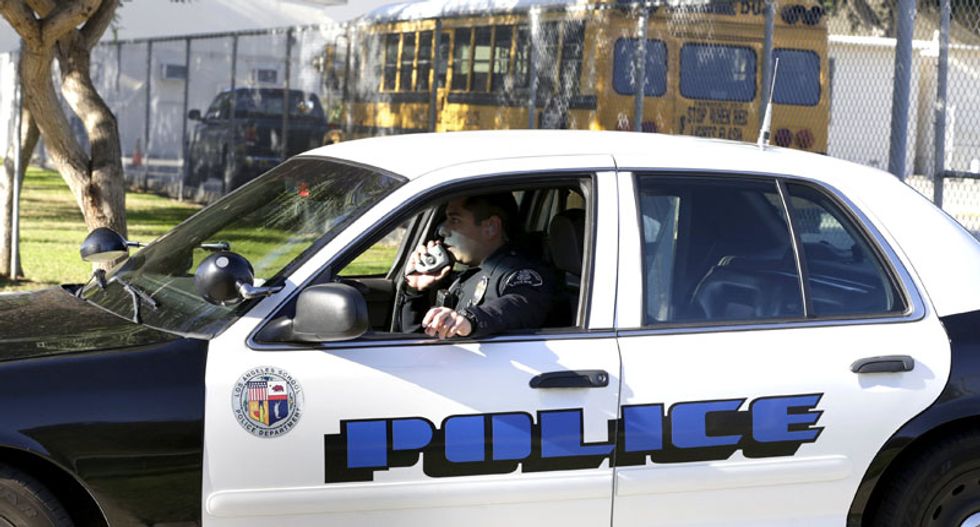 Los Angeles shut down all of its schools on Tuesday, ordering some 643,000 students to stay home after officials received a threatening email, only weeks after a deadly Islamic State-inspired attack in San Bernardino.

Authorities searched some 900 schools during the shutdown of the nation's second largest school district, which appeared to be unprecedented in scale.

The head of the New York City Police Department said officials there received a similar threat and indicated the Los Angeles closings may have been an "overreaction."

The Los Angeles school district regularly receives threats, but this one stood out for its scale, schools Superintendent Ramon Cortines said.

"This is a rare threat ... It was not to one school, two schools or three schools, it was many schools," Cortines told reporters at a press conference that began shortly before schools were to begin opening.

"I am not taking the chance of taking children any place into the building until I know it's safe."

A U.S. official said investigators were looking for a possible bomb or bombs in connection with the Los Angeles closure.

The threat came via an email sent to a school board member and mentioned backpacks and other packages, Cortines said.

In New York City, Police Commissioner William Bratton said the school system, the nation's largest, had also received a threat on Tuesday that was deemed noncredible.

Bratton said he believed that email was "almost exactly the same" as the one sent to Los Angeles.

"L.A. is a huge school system," said Bratton, who had served as police chief in Los Angeles. "To disrupt the daily schedules of half a million school children, their parents, day care, buses based on an anonymous email, without consultation, if in fact, consultation did not occur with law enforcement authorities, I think it was a significant overreaction."

U.S. Representative Karen Bass, who represents parts of Los Angeles, in an interview with MSNBC television praised local officials for acting quickly. "I really don't doubt that they did the right thing," Bass said.

"I understand the concern families must be feeling this morning," Garcetti said. "This decision has been made by the School district in an abundance of caution."

Officials with United Teachers Los Angeles, the union for instructors, also said they supported the decision to close schools.

Students already at school were sent home, officials said, and families scrambled to come up with plans after the last-minute closures.

"It's disappointing," said Trinity Williams, a high school student who dropped off her younger sister at elementary school, only to find it was closed. The two traveled on to Williams' high school before they realized the whole system was shut down.

"I was supposed to give an essay in class today, and finals are Friday," Williams said. "I can't afford to miss a day."

Lee Stein, a parent with a daughter in fifth grade at Ivanhoe Elementary School, said he heard about the closure via a news alert to his phone, which he confirmed by calling the principal.

"It's very concerning, especially in light of recent events," Stein said. "You hope it's a hoax. It's unfortunate that someone is preying upon people's fears."

Other parents used social media to vent frustration at having learned about the closures from the news media, rather than directly from the schools.

Ronna Bronstein, who has two sons in the fifth and eighth grades, said she was trying to find out more about the threat while shielding her younger child from the news.

"I don't want him to be frightened to go back to school tomorrow," she said.

School officials said that on Sept. 11, 2001, when many people returned home early from work after the attacks on the East Coast, Los Angeles schools remained open.

The San Bernardino attack and other recent mass shootings have pushed the issues of militant Islam and gun violence to the forefront of the U.S. presidential campaign.

The United States has suffered repeated deadly attacks in schools in recent years, typically carried out by gunmen. The deadliest one in the past decade occurred at Virginia Tech, where a shooter killed 32 people.

In the second deadliest, a lone gunman shot dead 20 young children and six educators at Sandy Hook Elementary School in Newtown, Connecticut, in 2012.