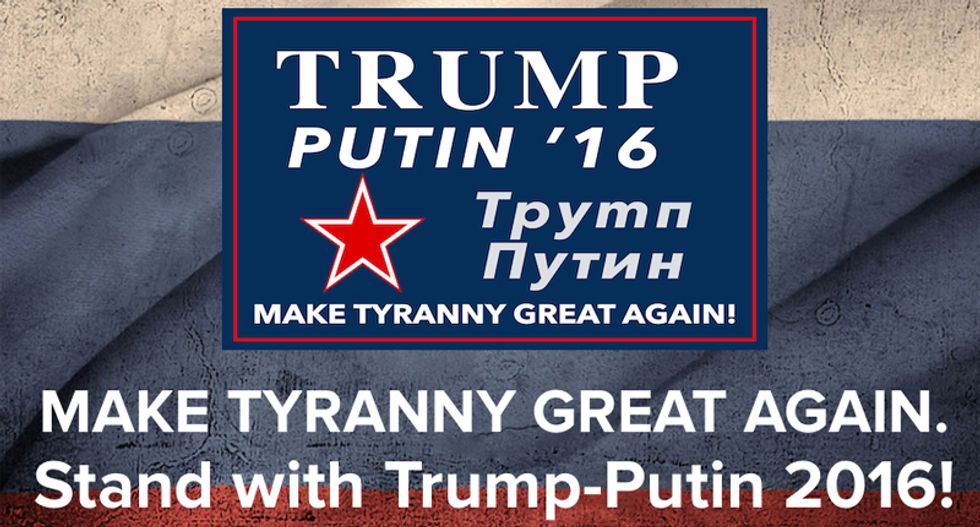 Trailing in the polls, Ohio Gov. John Kasich had a little fun with GOP front runner Donald Trump on Saturday,  jabbing the billionaire over his trading of compliments with Russian President Vladimir Putin, on a website promoting a Trump/Putin 2016 ticket.

The website features a banner calling for the ticket, with the slogan : "Make tyranny great again. Stand with Trump/Putin 2016!"

In the fake statement issued to the press, Kasich's campaign pointed out that Trump "picked Putin to be his vice president for his strong approach to dealing with dissent, flexible approach to democracy, rule of law and the Constitution, and his willingness to regularly violate other countries' territorial integrity in blatant violation of international law if it suited his aims."

Trump returns the compliment with: "It is always a great honor to be so nicely complimented by a man so highly respected within his own country and beyond."

The fake website promises: "Don’t mind the constitutional problems of our candidacy. This campaign will be terrific! Huge! A merger of two great powers!" with a caveat of, "Note: If member of media, sign up at your own risk."

The bottom of the website also has a disclaimer for those who request more info on the fake ticket, reading: "by signing up you are waiving all constitutional rights, civil liberties, notion of privacy and subjecting yourself to a steady stream of hugely outrageous comments."