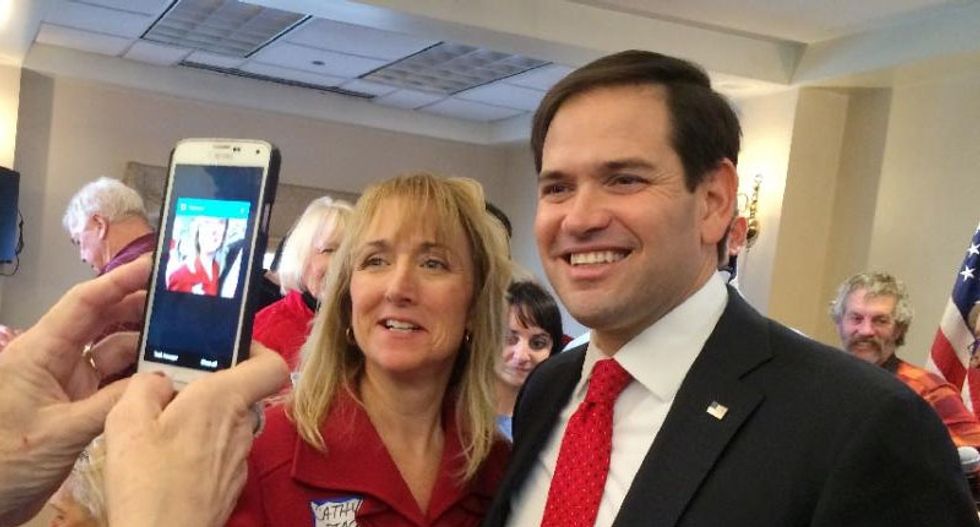 Republican presidential candidate Marco Rubio is the 44-year-old US senator from Florida with the million-watt smile, an affinity for hip-hop music and a propensity to ruffle establishment feathers in Washington (AFP Photo/Michael Mathes)

Donald Trump grabs headlines with his unshakable self-glorification. But better-informed, increasingly confident rival Marco Rubio is making a play for the Republican presidential nomination, and winning over skeptics in early-voting New Hampshire.

Rubio is the 44-year-old US senator from Florida with the million-watt smile, an affinity for hip-hop music and a propensity to ruffle establishment feathers in Washington.

But at a Friday campaign stop, he came across as a national security expert playing up his foreign policy fluency to a crowd shaken by recent spasms of extremist violence.

"Gun control" is not the answer, Rubio told about 180 voters at a Seacoast Republican Women's luncheon at a country club in the small town of Greenland.

"We need bomb control" because the California attackers had possessed pipe bombs, he said. "We need terrorist control."

Rubio is threading a political needle in the 2016 race.

He lies between the uncompromising ideological warfare being waged by rival candidate Ted Cruz and the establishmentarian Jeb Bush, whose campaign has struggled.

Perhaps the best communicator in today's Republican Party, Rubio is offering his brand of pragmatic conservatism, and he is being rewarded at the polls.

Trump remains the frontrunner nationally and in New Hampshire, but Rubio has surged into second, ahead of neurosurgeon Ben Carson, who is fading, and fellow Senator Cruz, recent polls show.

If foreign policy and national security are brought off the back burner, where they usually sit during Republican primaries, Rubio stands to gain considerably in his party's crowded nomination race.

As the women waited for Rubio to join them for lunch, the acronym ABT -- "anyone but Trump" -- was in the air.

"I'm having a hard time with him," Pam DuBois, 69, said of the brash celebrity billionaire. "He doesn't strike me as presidential."

New Jersey Governor Chris Christie has impressed her, especially with his experience as a federal prosecutor.

But DuBois has yet to make up her mind, "and I haven't ruled Rubio out," she said.

Rubio offers a mixture of fear and optimism on the campaign trail: dire warnings of "radical apocalyptic jihadists" and Russia's "gangster" President Vladimir Putin are followed by reminders that America remains the land of freedom and opportunity.

He has grown in confidence following strong performances in recent debates where he bested his onetime political mentor Bush.

"Being president isn't just about seeing what's in front you, it's about understanding what would happen next if you don't do what needs to be done," Rubio told the luncheon, noting how he had accurately predicted Russia would start a bombing campaign in Syria.

"I believe that over the last few years no one has shown better judgment or better foresight on these issues than I have."

Republican Congressman Chris Stewart, who attended the Greenland event, claimed he was one of the first national lawmakers to throw his support behind Rubio.

"I've been a fan of his since he emerged on the national stage," Stewart, a former Air Force pilot who highlighted the importance of defense and national security in the 2016 election, told AFP.

"I want to win the next election, and I think this is the guy who's most likely to lead a Republican victory."

But to some voters in New Hampshire, where retail, face-to-face politics is a cherished tradition to be flouted at a candidate's peril, Rubio has yet to engage as deeply in the state as residents here would like.

While Rubio has at least done his share of pressing the flesh, posing for selfies, and engaging one on one with voters, Trump has opted instead for larger, more impersonal rallies where voters are kept at a distance.

"There aren't 250 people in New Hampshire who have shaken his hand," Cullen, the strategist, said of Trump.

With barely two months before New Hampshire votes in the primary race, Cullen said Rubio might be playing it too safe by not going after frontrunner Trump.

Confronted with why he was not going on the offensive, Rubio signaled he would remain above the fray.

"I don't feel I need to tear anybody down in order to move up, and that's how we'll continue to govern our campaign," he said.

After the question-and-answer session, Dubois, the retiree, said she came away impressed by Rubio's "nimble" elaborations.

"He did move the needle for me," she said.