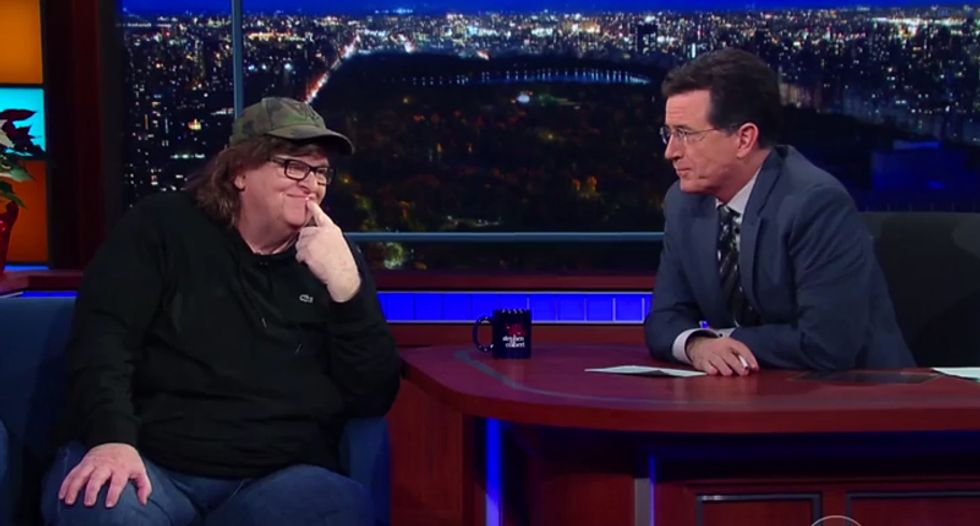 Moore is making the rounds promoting his new film, “Where To Invade Next,” in which the award-winning filmmaker visits other countries in search of answers for how to make an increasingly dysfunctional U.S. run better.

Turning to the topic of his recent protest in front of Trump Tower, holding a sign reading "We are all Muslims," Moore explained that conservatives are freaking out over a changing America and that political campaigns built upon those fears are driving Americans nuts.

"They are so unnerved and unhinged by the fact that we've had two terms of a president whose middle name is Hussein, gay people can get married now, and states are decriminalizing marijuana," Moore ticked off. "I mean this is the direction the country is going."

"Can I defend the appeal?" Colbert countered. "I'd like to defend the appeal, although I might not agree with what Donald Trump says, I can defend the appeal of the way he says it because so often we look at different problems we have in our country and people say, 'We'll, what is there to do?' People sort of throw up their hands. At least he says, 'Here is something to do!' It may be a dumb idea, it may be unconstitutional, it may be a pure idea that is based on purely business practices, not based on ideas of liberty. Because it's an idea and they want an answer."

"Are there answers in this film that we haven't thought of?" Colbert asked Moore.

"Yes," Moore replied. "This is a film of all answers. It's like no problems -- all solutions."

Watch the video below from The Late Show: