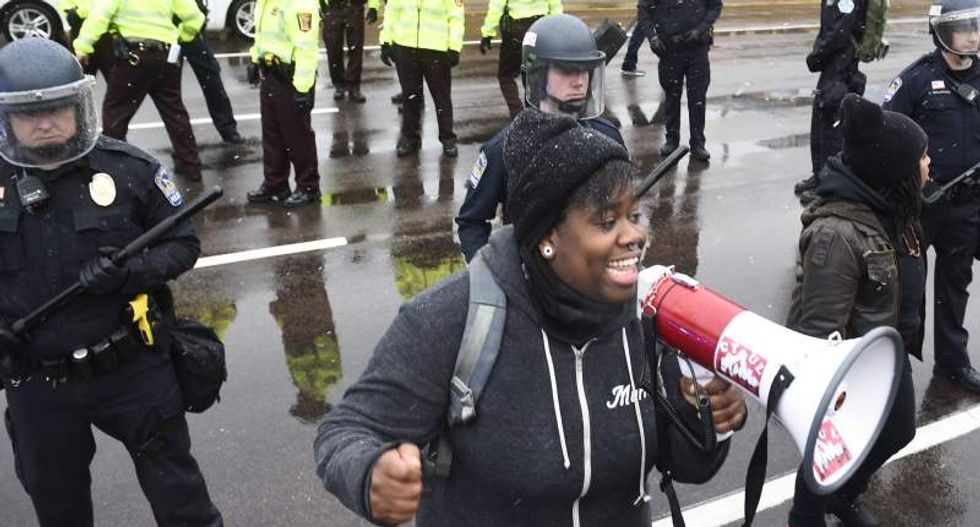 A protester named Oluchi of Minneapolis speaks to protesters after they shut down the main road to the Minneapolis St. Paul Airport following a short protest at the Mall of America in Bloomington, Minnesota on Dec. 23, 2015. (Reuters/Craig Lassig) Details

Brad Schultz ranted against Minneapolis-based activists connected to the movement on Dec. 24, the same night demonstrators briefly shut down traffic near the Minneapolis-St. Paul Airport.

"You dumb f*cking n*ggers," he wrote on the Black Lives Matter Minneapolis Facebook page. "Get out of town with your bullsh*t protesting."

Schultz also made an apparent reference to 24-year-old Jamar Clark, who was shot and killed by police in September, calling him a "loser life" [sic] and that he deserved to be shot.

"You make yourselves look worse. Get off your ass, get a job, do something," Schultz stated. "Just leave, white people don't like you."

He later deleted the post and apologized for it, but by that point, both screenshots of his remarks and his online profile -- listing him as an employee of Archer Daniels Midland -- were distributed online.

Three days later, the Chicago-based company confirmed on Twitter that it had investigated Schultz's comments and terminated his employment:

Minnesota Public Radio reported that Schultz's Facebook page is no longer accessible to the public.