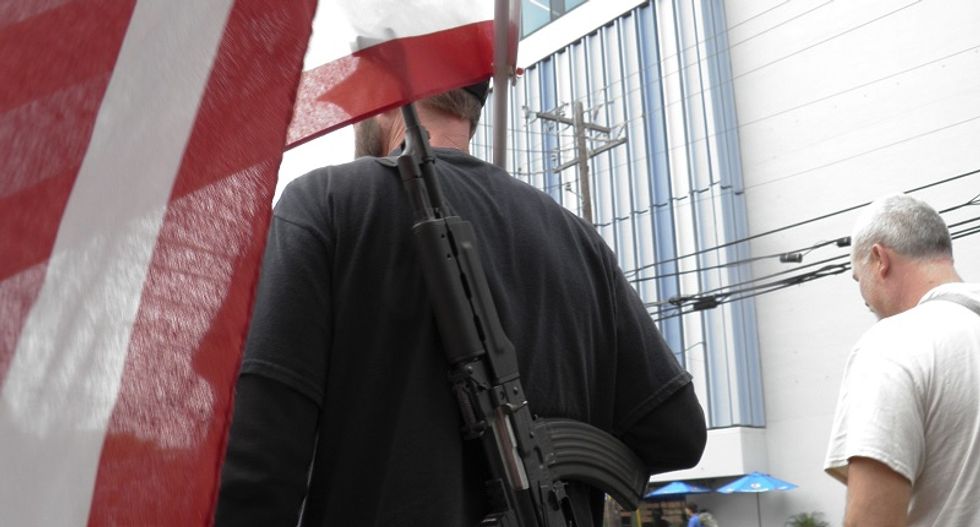 Pro-gun advocates take to the streets outside the University of Texas ahead of a 'mock mass shooting' event where they used cardboard cut-outs rifles, the simulated bangs of bullets on bullhorns and doused fake victims with fake blood, in Austin, Texas, December 12, 2015. REUTERS/Jon Herskovitz

Pro-gun advocates plan to use cardboard cut-out rifles, simulated bangs of bullets on bullhorns and douse fake victims with fake blood outside the University of Texas on Saturday in a theatrical event they say will show the need for firearms on campus.

Their planned "mock mass shooting" was met with a counter-protest and derision by many onlookers in the left-leaning city of Austin who saw the group pushing a position that could increase the danger brought by firearms at the university that saw one of the worst mass school shootings in U.S. history.

One of the mock mass shooting organizers, the group Come and Take It Texas, said allowing gun-free zones on campuses eliminates a human right to personal protection.

"Our goal is to instill the importance of everyone to be able to defend themselves in any way they choose," the group said in a statement posted on its website.

Ahead of the event, about 20 pro-gun activists walked near the university, some with military-style weapons over their shoulders.

The group was far outnumbered by media, police and students in the middle of final exams, many wondering what the small group of flag-waving, gun-toting people was doing.

"There is always something crazy going on in Texas," said student Zena Brown, a junior at the university.

The school threatened to arrest the group with trespassing if they tried to do their mock shooting on campus.

Cindy Samuelsen, who was taking her daughter back to Dallas, said the rally was disrespectful to the students and the university.

"I don't know what is wrong with these people in that they feel the need to show off their big guns," she said.

The mock mass shooting comes days after a university panel grudgingly acknowledged that it will have to allow guns in the classrooms under a new law that goes into effect next year, dubbed "campus carry."

The law allows people 21 and older with a concealed handgun license to carry handguns in classrooms and buildings throughout the University of Texas system, one of the nation's largest with an enrollment of more than 214,000 students.

Public universities will be required to allow campus carry as of Aug. 1, the 50th anniversary of one of the deadliest U.S. gun incidents on a campus. On that day, Charles Whitman killed 16 people and wounded 31 after firing from a perch atop the clock tower at the Austin campus of the University of Texas.