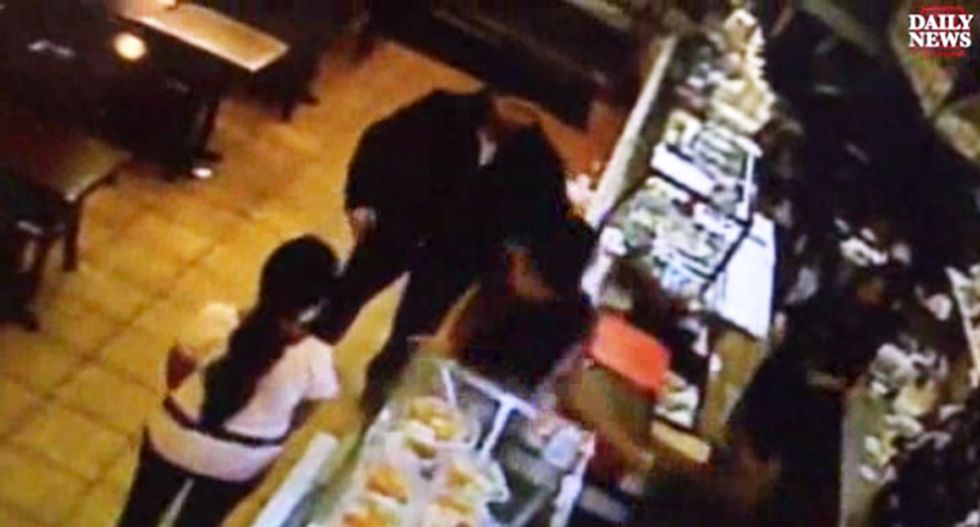 A New York man was taken into custody for launching an attack on workers in a restaurant Monday night after demanding to know if they were Muslims, the New York Daily News is reporting.

In video obtained by the Daily News, Robert Murino, 26, can be seen reaching across the counter and punching a worker at the Salt & Pepper restaurant after calling the employee a "Muslim motherf*cker."

According to court documents, Murino began by asking the employees -- who hail from Pakistan, India and Bangladesh -- how they felt about ISIS.

When staffer Tahir Mahood attempted to calm him down, the man reached across the counter and slapped him.

“I've been here for the last two years and nothing ever happened like this before, Mahood explained. "As a Muslim, I want to be polite, I don't want to fight anyone."

According to another employee, the altercation between Mahood and Murino came after he harassed other customers before turning on Mahood and saying, "Why don't you tell me your religion?" and calling him a "Muslim motherf*cker."

A brawl between employees and Murino ensued before he was ejected from the restaurant -- only to return moments later where he picked up chairs and began smashing the glass dividers in the restaurant before leaving again.

According to police, they picked Murino up at another restaurant nearby after employees identified him.

Murino, who has a prior arrest, was released on Thursday on $1,000 bail.

Watch the video below from the New York Daily News: