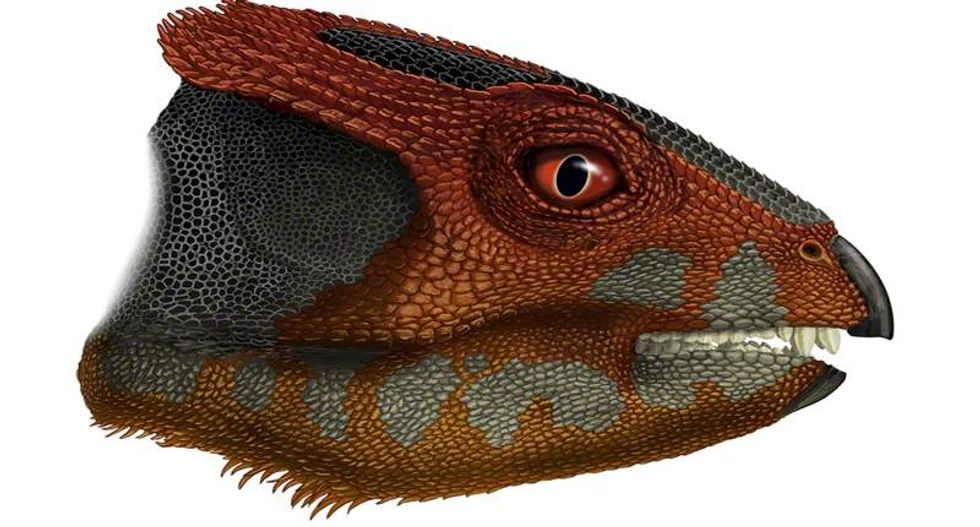 With their elaborate horns, bony neck frills and bulldozer-like bodies, members of the horned dinosaur group like Triceratops were among Earth's most impressive beasts during the Cretaceous Period near the end of the age of dinosaurs.

But a newly discovered fossil of one of the oldest-known members of this plant-eating group illustrates that the forerunners of these behemoths were much more modest creatures.

Scientists on Wednesday announced the discovery in the Gobi Desert in western China's Xinjiang Province of the remains of a spaniel-sized dinosaur they named Hualianceratops that lived about 160 million years ago late in the Jurassic Period.

At about 3 feet long (1 meter), it was much smaller than later members of the group, formally called ceratopsians. Triceratops, which lived alongside Tyrannosaurus rex in western North America about 67 million years ago, exceeded 30 feet (9 meters) in length.

Hualianceratops, meaning "ornamental face," did not have horns and walked on two legs, as opposed to four like the big later ceratopsians. It had a relatively large, triangular head, with a very small neck frill. Like all ceratopsians, it boasted a beak for cropping vegetation.

"It would look very odd, with its relatively big head and running about on its hind legs," said George Washington University paleontologist Catherine Forster. "It's not usual today to see animals walking on their hind legs. Humans are very unusual in that respect. But it was very common in the dinosaur world."

Ceratopsians did not become quadrupedal and did not acquire their trademark horns until tens of millions of years later.

Hualianceratops resided in the same time and place as the similar dinosaur Yinlong, which until now had been considered the earliest-known ceratopsian. Hualianceratops was more heavily built, "like a chunky version of Yinlong," Forster said.

Finding both of them shows there was more ceratopsian diversity at the time than previously known. The two lived alongside an array of plant-eating and meat-eating dinosaurs, turtles, crocodilians and primitive mammals.

Dinosaurs, not including their bird descendants, disappeared about 66 million years ago. The horned dinosaurs were an important herbivore group, particularly in North America, during the dinosaur age's twilight. Many had numerous horns above the nose, eyes and on the cheeks, as well as horns and other ornamentation on their neck frills.

The research appeared in the journal PLOS ONE.