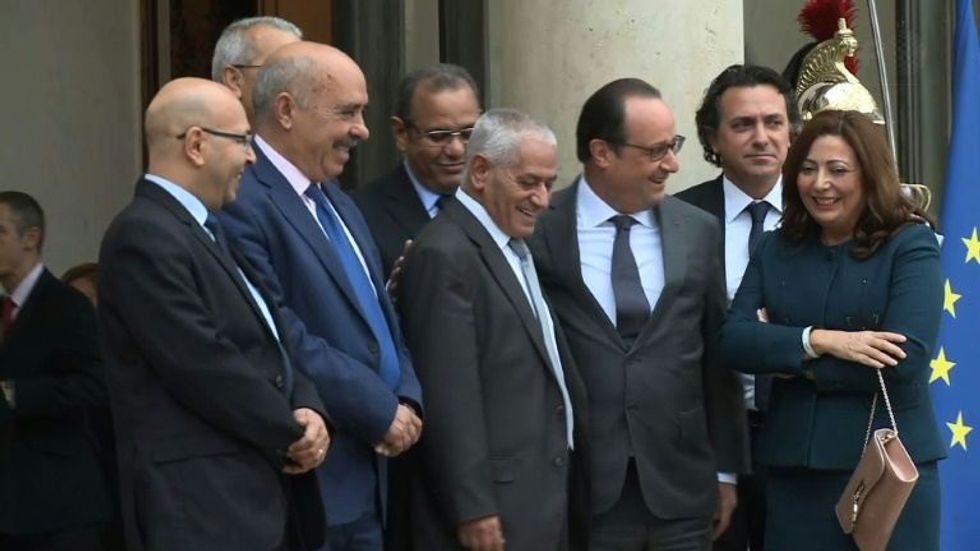 The Nobel Peace Prize will be awarded on Thursday to four organisations that helped save Tunisia's transition to democracy through dialogue, a method the laureates are keen to see applied in Syria and Libya.

"Arms can never be a solution, not in Syria nor in Libya. There is a need for dialogue," Abdessatar Ben Moussa, head of Tunisia's Human Rights League, told reporters in Oslo on Wednesday.

"No blood and no fighters."

Along with the Human Rights League, the National Dialogue Quartet is made up of the Tunisian General Labour Union (UTGG), the Confederation of Industry, Trade and Handicrafts (UTICA), and the Order of Lawyers.

The Quartet will receive the prestigious honour from the hands of the Norwegian Nobel Committee's chairwoman, Kaci Kullmann Five, at a ceremony scheduled to begin at 1:00 pm (1200 GMT) at Oslo's City Hall in the presence of Norway's King Harald and the Norwegian government.

This year's Nobel laureates in the fields of medicine, physics, chemistry, literature and economics will receive their prizes at a separate ceremony in Stockholm later Thursday.

The Quartet helped save the country's transition to democracy at a sensitive moment in 2013 when the process was in danger of collapsing because of widespread social unrest.

The group orchestrated a lengthy and thorny "national dialogue" between the Islamists of the Ennahda party and their opponents.

In honouring the National Dialogue Quartet, the Norwegian Nobel Committee wanted to shine the spotlight on Tunisia as a rare success story to emerge from the Arab Spring, the movement of popular uprisings that started in the country.

While uprisings in neighbouring Libya, Yemen and Syria have led to war and chaos, and to the return of repression in Egypt, Tunisia successfully adopted a new constitution in January 2014 and held democratic elections at the end of last year.

"Tunisia is an exception so far in the Arab Spring countries but this doesn't mean that it may not be replicated in other countries," said Houcine Abassi, secretary general of the powerful UTGG.

"Differences, regardless of the nature of those differences, can always be overcome through dialogue," added Fadhel Mahfoudh, the head of the Order of Lawyers.

the democratisation process remains fragile, amid the threat of jihadism.

Authorities have declared a state of emergency for the second time this year after a suicide attack on a bus belonging to the president's security entourage killed 12 people on November 24, for which the Islamic State (IS) jihadist group has claimed responsibility.

Last week, Amnesty International expressed concern over the subsequent wave of arrests and detentions by the security forces, saying it was "a troubling sign that the authorities are reverting to repressive and abusive measures".

"Freedom cannot accept any sort of sacrifice when it comes to human rights," said Ben Moussa.

"Basically terrorism feeds on the oppression of human rights."

Two other major attacks had rocked the country before last month's bus bombing: in March, 22 people were killed at the Bardo Museum in Tunis, and 38 tourists were killed in a beach resort massacre in June.

On Wednesday, five soldiers were injured in a gunfight with jihadists in a mountainous region of the country.

A UN working group has meanwhile estimated at 5,500 the number of Tunisians who have left to fight in Syria, Iraq and Libya, making the country one of the world's biggest jihadist breeding grounds.

"We need to tackle the root causes of terrorism," said Ben Moussa, singling out "poverty and marginalisation".

That is a difficult task after this year's attacks: the tourism industry accounted for about seven percent of the country's economy and some 400,000 jobs were directly or indirectly linked to the sector, but it has taken a nosedive since the beach massacre.

At the end of October, the number of hotel nights registered in the country had plunged by 60 percent from the previous year, official data showed.

"We succeeded in our democratic transition but we need to succeed in our economic transition," said Ouided Bouchamaoui, the head of UTICA, which is currently at odds with the UGTT over the issue of private sector salary increases.