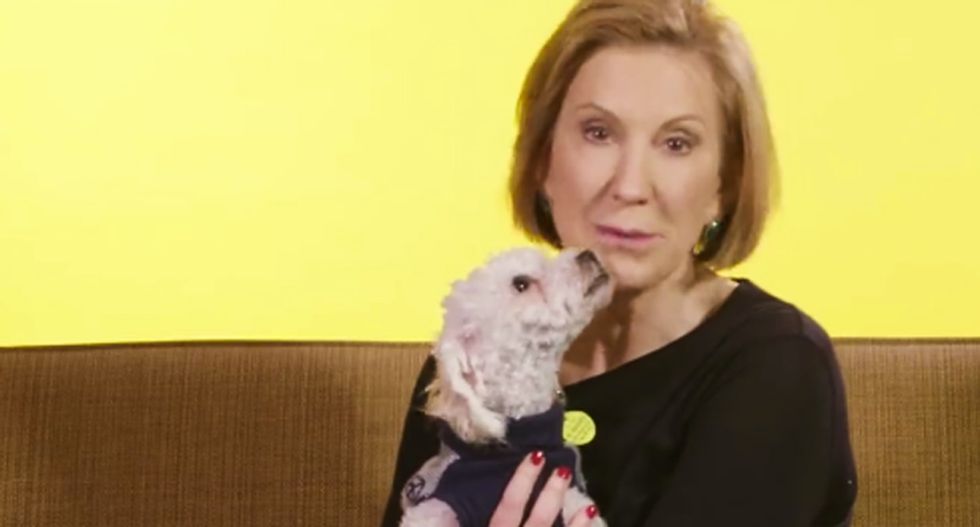 I’m not just talking about the 30,000 former HP employees she pink-slipped so she could ship their jobs overseas who hate hate hate her. I’m talking about the fact that nobody likes her -- and not in the “everybody hates Ted Cruz, but at least he still polls well” kind of way.

Carly is just unlikeable and the polls reflect it, based upon her 2.3 percent standing the 2016 GOP presidential polls.

To put that in perspective, that is about half of where Jeb! Bush is polling -- and we all know his campaign is stuck in a persistent vegetative state. Ironically.

So faced with what might be her last debate –based upon how much more she wants to debase herself by putting up with “you people” and reporters who ask her pesky “gotcha questions” -- Carly’s campaign made her sit down with a bunch of puppies to make her seem “human” and “nice” and not a "horrifying presence that could suck the souls from a room full of toddlers with just a glance."

At least that is what the focus group said.

It is questionable -- from a political standpoint -- for a candidate to say “dogs are better than cats,” even though all reasonable people can agree that it is indisputable fact of life and not even open for debate anymore.

But Carly had to be Carly, and she couldn’t just make nice with the puppies by doing baby talk. Oh, no. Snarly Carly had to bare her incisors from time to time and get her digs in.

For example, while holding two German Shepard puppies, she said, “ You know, President Obama ate one of your cousins. Vote Republican.”

How adorable. It may not be Carly dog-whistling (HA!) “Muslim, Muslim, Muslim!” but you get the general drift.

“Someone on Twitter said that I reminded them of Cruella deVil. That is totally unfair" she said while petting a white dog. “Although your coat is exceptionally soft.”

Nope. You’re still unlikable, Carly. Next time try kittens. Maybe with a little Sara McLachlan singing that sad angel animal song so people will send you money before your campaign is -- mercifully -- "put down."

Dogs are better than cats. Carly Fiorina explains why: