Number of foreign fighters going to Iraq and Syria has doubled: report 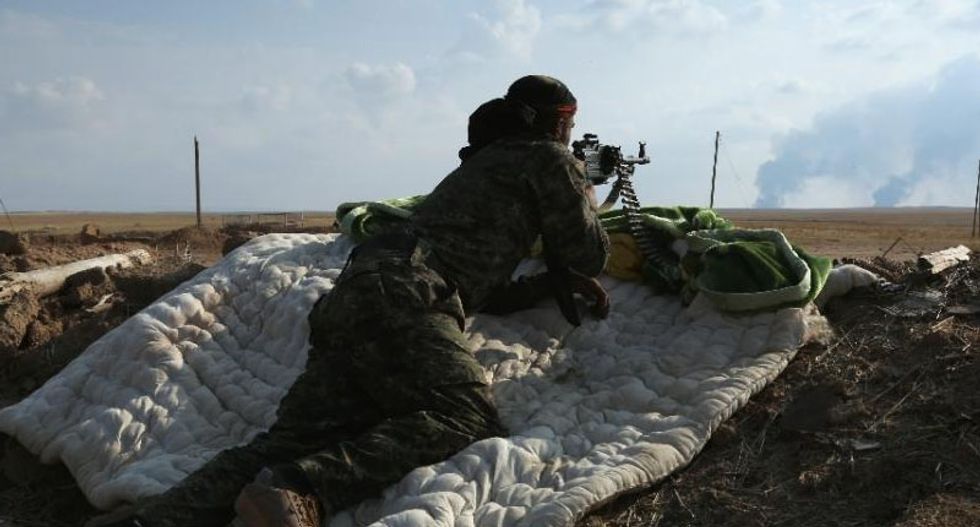 The number of foreign fighters in Iraq and Syria has more than doubled since 2014 to at least 27,000, according to a report by The Soufan Group, a New York-based intelligence consultancy (AFP Photo/Delil Souleiman)

The number of foreign fighters in Iraq and Syria has more than doubled since last year to at least 27,000, a report by an intelligence consultancy said on Tuesday, highlighting the global dimension of the conflict.

The figures, compiled by The Soufan Group, indicate that efforts by countries around the world to stem the flow of foreign fighters to Iraq and Syria and blunt the appeal of violent organisations such as the Islamic State group (IS) appear to have made little impact.

"The Islamic State has seen success beyond the dreams of other terrorist groups that now appear conventional and even old-fashioned, such as Al-Qaeda.

"It has energised tens of thousands of people to join it, and inspired many more to support it."

The largest number travelled to the two countries, across which IS controls a swathe of territory, from the Middle East and the Maghreb, with around 8,000 foreign fighters each.

Around 5,000 made their way from Europe, with a further 4,700 from former Soviet republics.

The Soufan Group added that between 20 and 30 percent of foreign fighters were returning to their home countries, creating major challenges for domestic security agencies as IS in particular looks to carry out an increasing number of attacks overseas.

The IS group claimed responsibility for a massive attack in Paris last month that left 130 dead, and its fighters have been held responsible for violence in a litany of countries ranging from Iraq to Bangladesh.

The threat of returning foreign fighters has sparked widespread debate, particularly in Western countries, many of which have criminalised travel to Syria to fight in the country's years-long conflict.

In the wake of the Paris attacks, American lawmakers have also called into question a programme that allows Europeans to travel to the United States without a visa.

But, according to The Soufan Group, the latest figures are "evidence that efforts to contain the flow of foreign recruits to extremist groups in Syria and Iraq have had limited impact".

"As the Islamic State changes its focus from consolidating control of territory to attacking its foreign enemies in their own homelands, or their interests elsewhere, the profile of its foreign recruits will also change," it added.

It has sought to recruit followers via social media, prompting growing alarm in the West, with the European Union launching a forum this month to bring together Internet giants like Google and Facebook as well as law enforcement agencies to combat online extremism.

The Soufan Group noted, however, that "while the power of the Islamic State's social media outreach is undeniable, it appears more often to prepare the ground for persuasion, rather than to force the decision".

"As hotbeds develop, recruitment through social media becomes less important than via direct human contact, as clusters of friends and neighbours persuade each other to travel separately or together to join the Islamic State.

"Even if the Islamic State is a failing enterprise in steady decline, it will be able to influence the actions of its adherents, and it may become more dangerous as it dies."