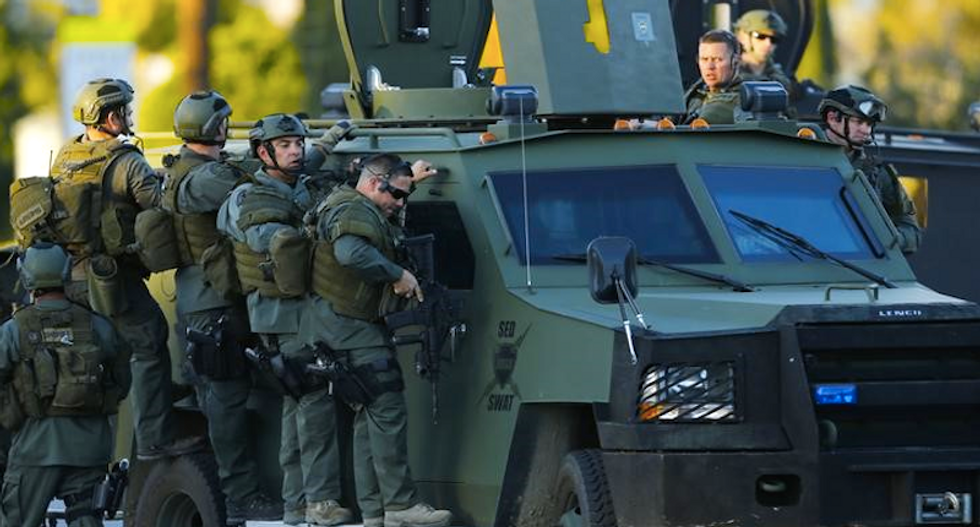 The New York Times, in its first front-page editorial in nearly a century, on Saturday called for outlawing the kinds of rifles used in the California shooting massacre this week that left 14 people dead.

The newspaper's editorial comes three days after Syed Rizwan Farook and Tashfeen Malik, a married couple, carried out the mass shooting in San Bernardino with legally purchased, .223 caliber assault-style rifles. The couple also had semi-automatic pistols. FBI officials say they are investigating the shooting as an "act of terrorism."

U.S. officials have said Malik is believed to have pledged allegiance to a leader of the militant group Islamic State.

"Certain kinds of weapons, like the slightly modified combat rifles used in California, and certain kinds of ammunition, must be outlawed for civilian ownership," the New York Times editorial said.

The editorial went on to argue that an act to outlaw such weapons would "require Americans who own those kinds of weapons to give them up for the good of their fellow citizens."

Republican presidential candidates dismissed the editorial, with New Jersey Governor Chris Christie calling it "typical liberal claptrap." In excerpts from an interview with CBS News "Face the Nation" airing on Sunday, Christie said instead, more should be done to institutionalize the mentally ill.

Republican front-runner Donald Trump, asked by reporters in Iowa where he was campaigning about the editorial, cited the shootings in Paris and California, saying the victims "could have protected themselves if they had guns."

Times Publisher Arthur Sulzberger, Jr., said the editorial was placed on the front page "to deliver a strong and visible statement of frustration and anguish about our country’s inability to come to terms with the scourge of guns."

President Barack Obama has called for legislation making it harder for criminals to get guns. He has noted mass shootings do not happen as frequently in other advanced countries and said the United States should address the problem.

The debate over gun control has long been one of the most contentious political issues in the United States, with the right to gun ownership protected in the U.S. Constitution's Second Amendment.

It is the first time The Times has run an editorial on the front page since 1920, when the newspaper expressed dismay at the nomination of Warren G. Harding as the Republican presidential candidate. Harding went on to win the general election that year.