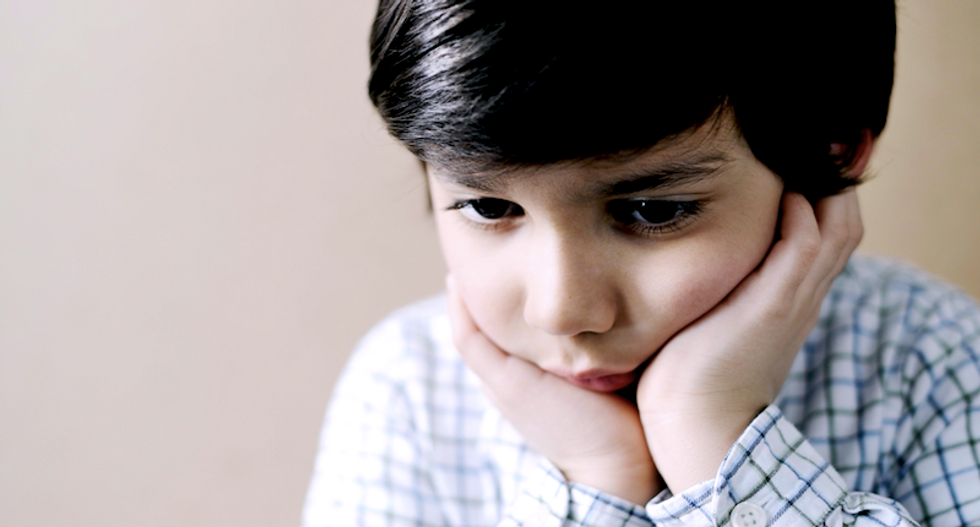 Boy is sad or worried (Shutterstock)

An Ohio seventh-grader is accused of threatening to shoot a Muslim classmate he called a terrorist and a "towel head."

The boy threatened on Dec. 7 to bring a .40-caliber gun from home the following day and kill a sixth-grader he had been feuding with on the school bus, reported WHIO-TV.

The older boy called the Muslim student "the son of ISIS" and accused him of responsibility for destroying the World Trade Center towers on Sept. 11, 2001 -- which happened before either boy was born.

The seventh-grader then asked the younger boy if he intended to bomb him, witnesses said.

The victim said he did not hear the older boy threaten to shoot him, but another student did and reported the incident to the bus driver.

The incident was captured on surveillance video that also recorded audio, and the victim said he believed the older boy would hurt him or other students.

The older boy admitted to using racial slurs, saying he was angry at the Muslim boy because he never wanted to sit down on the bus and plays his music too loud.

He told police he didn't remember saying anything about a gun, but he agreed the recording showed he had threatened to shoot his classmate.

The boy told police that he was familiar with firearms because he hunts with his father.

He was arrested and charged with ethnic intimidation and aggravated menacing.

The seventh-grader wrote an apology letter to the Muslim boy, saying he was sorry for calling him names and scaring him.

Administrators at Vandalia-Butler City Schools have called for a 10-day suspension and recommended expulsion for the seventh-grader.