Our Ayn Randian dystopia: Here's the secret five-step plan to privatize everything 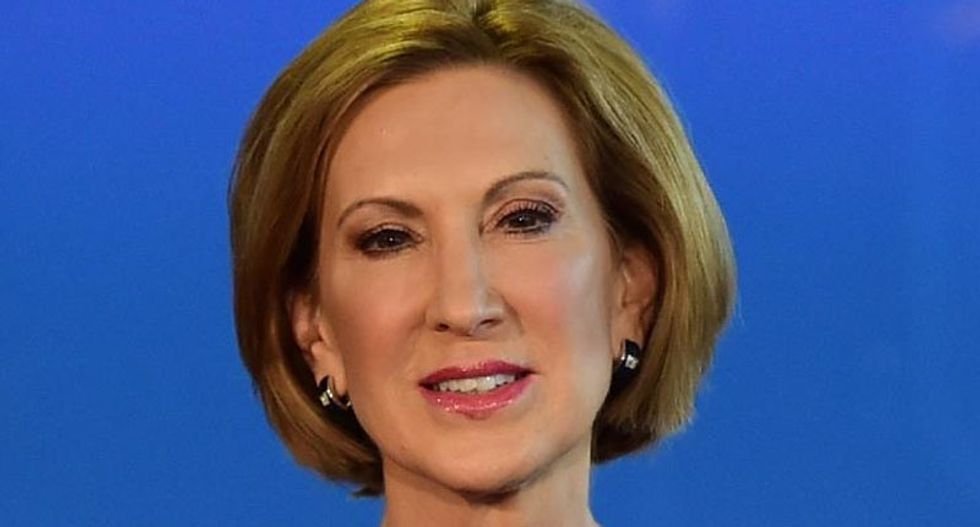 Carly Fiorina, the former chief executive of Hewlett-Packard, delivered a withering response to insulting comments about her looks that Donald Trump made in a recent magazine interview (AFP Photo/Frederic J Brown)

Law enforcement, education, health care, water management, government itself -- all have been or are being privatized. People with money get the best of each service.

At the heart of privatization is a disdain for government and a distrust of society, and a mindless individualism that leaves little room for cooperation. Adherents of privatization demand 'freedom' unless they need the government to intervene on their behalf.

These privatizers have a system:

1. Convince Yourself that "I Did It On My Own"

The people in position to take from society seek to rationalize their actions, and many have accomplished this through the philosophy of Ayn Rand, the author of The Virtue of Selfishness. She rejected community values, saying "Any group...is only a number of individuals...If any civilization is to survive, it is the morality of altruism that men have to reject."

Post-Ayn-Rand, in the growing era of neoliberalism, with Ronald Reagan blurting "government is the problem" and Margaret Thatcher proclaiming "There is no such thing as society," once-respected institutions like public education and public transportation were demonized as "socialist" and "Soviet-style." The message has been repeated so often by the business-backed media that the general public began to believe it. Said The Economist with regard to product development, "Governments have always been lousy at picking winners, and they are likely to become more so, as legions of entrepreneurs and tinkerers swap designs online, turn them into products at home and market them globally from a garage. As the revolution rages, governments should stick to the basics...Leave the rest to the revolutionaries."

But as Mariana Mazzucato points out in The Entrepreneurial State, "In reality it is the State that has been engaged on a massive scale in entrepreneurial risk taking to spur innovation." There is much evidence for this, in a multitude of disciplines, especially in technology and pharmaceuticals, both of which have seen corporate research labs diminishing if not entirely disappearing.

In the burgeoning new field of nanotechnology, says Mazzucato, industry cannot justify applications that require 10 to 20 years of development and which demand a coordination of physics, chemistry, biology, medicine, engineering, and computer science.

2. Insist that the Removal of Government Will Benefit All People

The removal of government is equated to a vague demand for "freedom" which is hyperbolic if not meaningless. It gained momentum with Milton Friedman, who said: "Underlying most arguments against the free market is a lack of belief in freedom itself." The Cato Institute went on to preach that "Free markets create a future promoting integrity and trust." And Forbes Magazine founder Steve Forbes blustered: "You can't create prosperity without freedom!"

Despite the fact that this 'freedom' has generated the greatest inequality in nearly 100 years, apologists try to convince us that somehow we're all prospering. From the Wall Street Journal: The U.S. economy is on a tear. From a Moody's analyst: Our economy is firing on most cylinders.

Some libertarian "lovers of freedom" go to even greater extremes to defend the benefits of inequality for all of us, claiming that income inequality is Good For The Poor, and even that "Income inequality in a capitalist system is truly beautiful."

3. Ensure that Government Isn't Removed Until You Get Rich

As the well-to-do have complained about government, they've also made sure that government has continued to help them, with a mind-boggling array of deductions, exemptions, exclusions, and loopholes.

At least $2.2 trillion per year in tax expenditures, tax underpayments, tax havens, and corporate nonpayment go mostly to the very rich, the most brazen of whom make the astonishing claim that their hedge fund income should be taxed at a much lower rate than a teacher's income.

Their tax breaks are augmented by the payroll tax rate limit, which allows multi-millionaires to pay a tiny percentage compared to middle-income earners; by high-risk derivatives that are the first to be paid off in a bank collapse; and by a bankruptcy law that allows businesses, but not students, to get out of debt.

4. Defund Government Until Privatization Seems Like the Only Option

This has happened most notably in education, with a simple formula, according to The Nation: "Use standardized tests to declare dozens of poor schools 'persistently failing'; put these under the control of a special unelected authority; and then have that authority replace the public schools with charters." And, of course, cut funding. According to the Center on Budget and Policy Priorities, forty-eight states — all except Alaska and North Dakota — were spending less per student in 2014 than they did before the recession.

It's happening to Social Security, perhaps the most efficiently run system, public or private, in our nation's history. As Richard Eskow notes, "Congress has cut 14 out of the last 16 SSA budget requests. There’s only one rational explanation for that: a hostility toward government itself, combined with the determination to place more public resources in corporate hands through 'privatization.'”

It's happening to police forces, which are going private in neighborhoods and on corporate campuses as public money is disappearing.

5. Remain Ignorant of Any Troublesome Facts

Education: A private system that pays a charter CEO 350 times more per student than the corresponding public school chancellor.

Health Care: The most expensive system in the developed world, with the price of common surgeries anywhere from three to ten times higher than in much of Europe, and with 43 percent of sick Americans skipping doctor's visits and/or medication purchases in 2011 because of excessive costs. Medicare, on the other hand, which is largely without the profit motive and the competing sources of billing, is efficiently run, for all eligible Americans.

Banking: Thanks to private banks, interest claims one out of every three dollars that we spend, and by the time we retire with a 401(k), nearly half of our money is lost to the banks. But the public bank of North Dakota (BND) had an equity return of 23.4% before the state's oil boom. The normally privatization-minded Wall Street Journal admits that the BND "is more profitable than Goldman Sachs Group Inc., has a better credit rating than J.P. Morgan Chase & Co. and hasn’t seen profit growth drop since 2003."

Law Enforcement: As public money for police protection is depleted, our communities are being subjected to law enforcement officers who are insufficiently trained, poorly regulated, and often unaccountable to the public for their actions.

Water Management: A water security expert suggested that "One promising solution is to create water markets that allow people to buy and sell rights to use water." But a 2009 analysis of water and sewer utilities by Food and Water Watch found that private companies charge up to 80 percent more for water and 100 percent more for sewer services.

The Environment: According to former World Bank Chief Economist Nicholas Stern, climate change is "the greatest market failure the world has seen." Yet Bloomberg reports that "Wall Street firms are investing in businesses that will profit as the planet gets hotter."

Privatization is closely connected to the demand for individualism over cooperation. But the belief that self-centeredness will benefit everyone is backwards. As George Lakoff summarizes: "The Public provides freedom...Individualism begins after the roads are built, after individualists have had an education, after medical research has cured their diseases..."