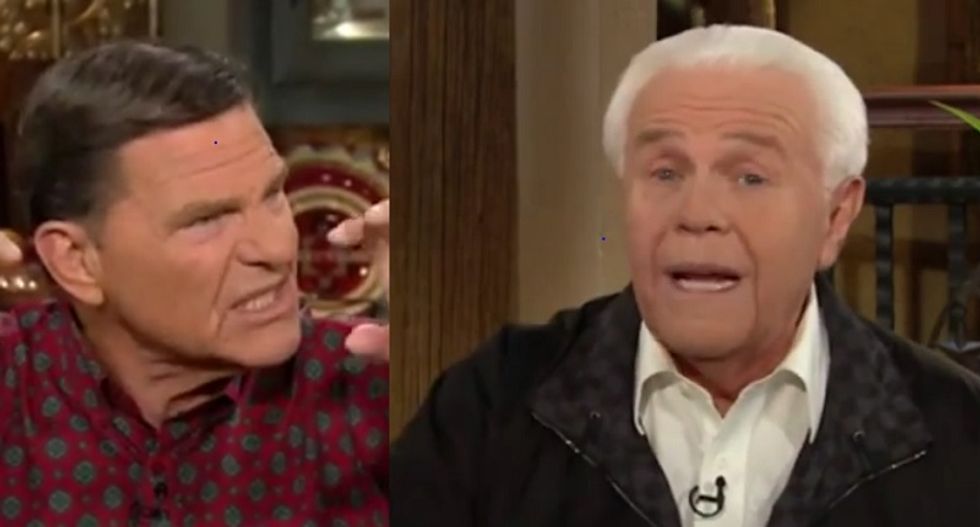 If you've ever wondered why some Christian preachers must hopscotch the globe in fancy private jets, it's in part so that they don't have to get on commercial planes with the "demon" common folk.

Preachers from the so-called "prosperity gospel" movement, Kenneth Copeland and Jesse Duplantis, tried to explain their controversial need for their followers to give up their hard-earned dollars so they can fly in luxury in an interview posted Wednesday.

"Now Oral [Roberts] used to fly airlines," Copeland explained. "But even back then it got to the place where it was agitating his spirit, people coming up to him, he had become famous, and they wanted him to pray for them and all that. You can't manage that today, this dope-filled world, and get in a long tube with a bunch of demons."

Copeland then pointed out he could "scratch my flying itch" by riding around in his single-engine, open-cockpit plane.

Duplantis then said God spoke to him about his one private jet and said just having the one is letting his "faith stagnate." He described a casual chat he had with God while flying home on his jet.

"As I was going home, the lord, real quickly, he said, 'Jesse, do you like your plane?'" Duplantis said. "I thought, that's an odd statement. I said, 'Well certainly lord. He said, 'Do you really like it?' And I thought, 'Well yes, lord.' And he said, 'So that's it? You gonna let your faith stagnate?'"

Watch the two try and justify their private jet ownership, as posted to YouTube, here: